Q: "Thanks for putting up the webpage about the 1956 Topps set!


When I was about 7 years old (1958) a neighbor boy handed me about 30 of these beauties... I loved baseball but had never seen anything like these before!  That's how my collection got started and I think I still have every one of those original cards.


I also have a question about the set you may be able to answer.  Looking at some of the Cleveland Indians cards, I noticed that some have a "C" emblem on their cap while others have the "C" but with the Chief Wahoo emblem inside.  Do you know why that is?


Did they have 'home' and 'away' hats?  I know teams today have home & away uniforms but I never noticed if their hats are different too or always the same."

A:  I didn't have an answer right away, so I asked some members of SABR (Society for American Baseball Research).  It looks like the Indians added Chief Wahoo to their caps in 1953. There weren't separate "home" and "away" caps back then. 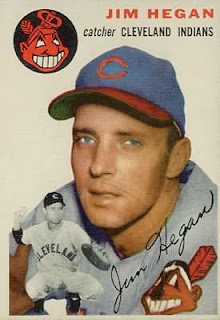 After finding that out, I went through my 1954 Topps and Bowman cards. All the Indians in those sets have the wishbone "C" without Chief Wahoo. I'm guessing that the pictures were taken in 1953 Spring Training before the cap change took place. 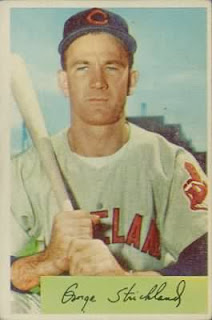 For my 1955 cards, I see that Topps Indians show both cap designs. Most have just the wishbone "C" but four (Hal Newhouser, Ray Narleski, Dave Hoskins, and Don Mossi) have the Chief.  Looking a little deeper, I discovered that none of the four was on the team before '54. As I wrote in my 1956 Topps page, they were known for recycling pictures from year to year (for example, Hank Aaaron's "head shot" photo was the same in '54, '55 and '56).As for Bowman in 1955, all my Indians cards seem to show Chief Wahoo. 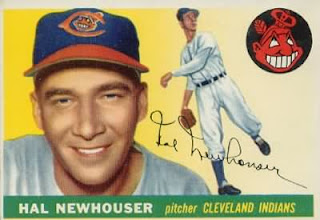 If you look through your '56 Topps cards again, you'll see that the Tribesmen with the newer-style caps (Mossi, Santiago, etc.) weren't with the team before the change, and a few veterans who were (Feller and Wertz) but didn't appear on Topps cards in 1954 and '55. Many of the photos of the players without the Chief are recycled.  In fact, Rosen, Avila and Hegan all have "head shots" that were used in the 1955 set (and Hegan's was used in '54 as well, just compare the card below to the first one shown in the post). 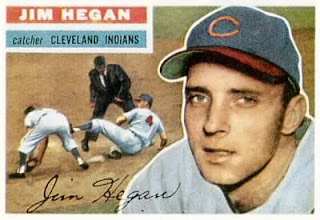 What a great question...I'd never noticed that before.  It was fun looking through my cards for an answer.
Posted by Chris Stufflestreet at 8:30 AM