I’ve been pulling out my old baseball cards to finish some sets and see what I put away nearly 20 years ago when I got married. I have a Pete Reiser card. Can you tell me what this card is?  I also have a Tom Henrich of that year and I’ve not been able to match them to a particular set.
This is the card in question: 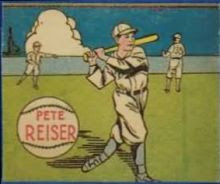 Any help is appreciated so I can quit Googling and poring through the SCD Standard Catalog of ball cards.
Thanks for your thoughts.

A: Thanks for sending the scan. It's from a set that you probably won't find on Google unless you know the name of the manufacturer...which isn't on the card, making it frustrating (as you well know).

Your card is from the 1943 MP & Co. set. It was one of the few issues that was released during the World War Two years. There was a similar set issued in 1949 but Reiser wasn't in that one.

Here's a page that will give you more info about the set.