A "non-computerized" elderly friend has an early card 1 1/2" x 2 5/8" depicting "Wells" with "Jersey City" on his shirt---a history of this player is on the back, some of which is missing because the card was poorly removed from a scrap book and "Baseball Series No. 56" along the bottom. I can find nothing about this series but suspect it is pre-WW I. It is not among the sets you show that I checked up to the 1930's nor is a Wells listed. Are you aware of this set of cards?---any help you can give would be appreciated.

A: The card is from the C46 Imperial Tobacco issue. It's a Canadian set from 1912 that featured players from the International League. In fact, it's the only "major" Canadian baseball card issue before the 1930s. It's a set I haven't yet added to my site but would be a great addition in the future. 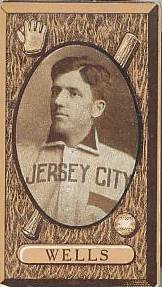 Here's a page about the set from the Old Cardboard website.
Posted by Chris Stufflestreet at 8:30 AM