This has been a sad week for baseball fans. First, legendary broadcaster Ernie Harwell has gone behind The Golden Microphone in the Sky, and now I've learned that Robin Roberts has also passed away.

Better writers than I have written moving tributes to both men, so I won't add to the philosophical wind that always picks up when legends depart. However, I do have a card to share.

When I was in high school and beginning to collect more vintage material, I picked up 1952 Topps cards when I could get them cheaply. I picked up my first two '52s in the Summer of 1988, but I wouldn't pick up my first Hall of Fame player from the set until the next year. At $6 I thought it was quite a steal. 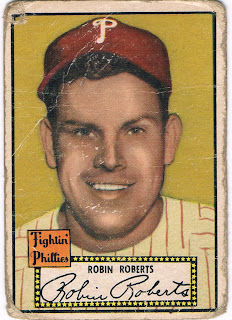 In fact, I still do.

Rest in Peace, Mr. Roberts. You may have been called up to pitch in the Field of Dreams, but you'll be missed here.
Posted by Chris Stufflestreet at 8:30 AM