I've mentioned before in this blog that I am a Steelers fan. When it comes to football, all I collect are Steeler cards. Well, that's not exactly accurate...

I do have a card of one Cleveland Brown in my collection. It's a 1975 Topps card of Greg Pruitt: 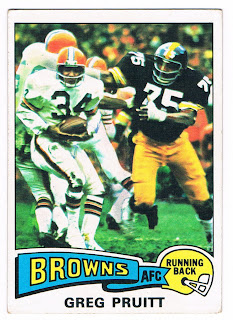 And you can probably understand why it's in my collection. In the photo, Pruitt is about to have his clock cleaned by "Mean" Joe Greene. It was also one of the few "action" cards of the 1970-'81 era that needed minimal airbrushing from Topps to remove the logos, since the Browns didn't use a distinct logo and the Steelers' familiar icon is on the right (hidden) side of Greene's helmet.

Greene was my favorite player when I was a kid. When I saw that Coke commercial, I wish I could have given the man a bottle so I could get his jersey too. When I played football in high school, I played defensive tackle and wore #75 proudly. So, when I was flipping through some common football cards at a show and saw this one, it just had to go into my collection.

Two of the other Joe Greene cards I own are from 1972. The NFL Players' Association released three sets that year showing some of its members, but since it was a union-sponsored set, the team logos were missing. One set consisted of stamps and an album to hold them, and at this time I don't have any of those (and besides, there's no Joe Greene stamp in the set anyway). The other two sets were distributed through those coin-operated vending machines you see on the way out of retail stores and supermarkets. So, for a dime or a quarter, you'd get one of these: 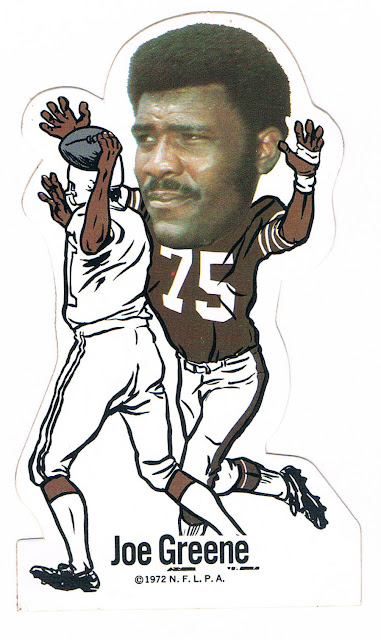 Another great image of Greene about to make somebody sorry, even if it is a cartoon. These are vinyl stickers, with blank backs that could be removed to expose the adhesive that allowed you to stick it somewhere. There were 20 players included in this set. Terry Bradshaw is the other Steeler, while Alan Page and Ron Johnson were short-printed. Also, Joe Namath and Dick Butkus are both found with and without a reversed negative. The 1972 NFLPA Vinyl Stickers are occasionally sold as a "set" of 18 with one Namath and Butkus variation and the two SPs missing.

In addition to the vinyl stickers, the NFLPA also sold fabric "cards" that could be ironed on to clothes. They were sold through the same vending machines as the stickers. Joe Greene's photo may look familiar: 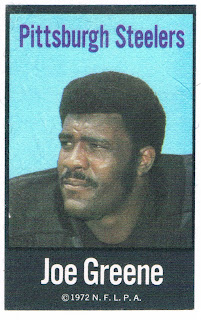 There were 35 players in the set of fabric cards, and Bradshaw would again be the only other Steeler in the set. The backs are blank and somewhat transparent. Some collectors seek out Roger Staubach's "card" from this set, as it is from the same year as his Topps rookie card.

I'm not sure why the player's union decided to issue three oddball sets in one year. Perhaps they were exploring possible revenue streams, or testing the market to see whether they could find a loophole to bypass Topps' stranglehold on the football card market. In any case, they're neat little pieces that go well with any collection, whether the focus is a team, a player or a general football motif.
Posted by Chris Stufflestreet at 8:30 AM