Every so often, the Players' Union and Major League Baseball work towards a new collective bargaining agreement, and negotiations often spill over into the press as "updates" on the progress. Both sides talk tough, and sometimes there's a strike or a lockout. This is nothing new.  During the two longest strikes (1981 and 1994), many fans stayed away from the game out of disgust but most came back eventually.

Something that gets mentioned by fans during these deliberations is the fact that players are welcome to form their own league if they aren't happy with the "pittance" they make now. It's happened before; in 1890, several National League players quit their teams and formed the Players League. It only lasted one season before the players realized how much it cost them to run things. A generation later, a new group of players figured they could beat the system, and the Federal League was their solution.

Many owners at that time were notorious cheapskates. Players then had no union to represent them, and many were shackled by one-sided contracts that tied them to their teams. At the time, owners were also allowed to be partners in the ownership of other teams, so they held a great advantage that players weren't able to overcome. Even without having part ownership, they could influence other owners simply by making deals to prevent another team from signing certain players. At that time, players couldn't charge owners with collusion and since they weren't organized they had no real power to change their position. The new league was seen as a way to help gain some bargaining ground.

In 1913, there were six teams (mostly in the Midwest) in the independent Columbia League. This league was formed and run by investors who wanted to profit from professional baseball but weren't able to buy a franchise in either the American or National League.  Trying to avoid legal trouble, they only offered contracts to players not already under existing contracts.

The league did very well financially that season, so the owners decided to turn their independent league into a third major league. For 1914, the Columbia League was renamed the Federal League. Plans were made to expand to the east coast (preferably in existing major league cities), build new ball parks, and actively pursue established major league ballplayers with promises of higher salaries.

For baseball card collectors, Federal League players were featured in a couple of sets. While some are pretty tough, like T214 Victory, the 1915 Cracker Jack set is much more common. A few Federal Leaguers from that set are shown here as a means of illustration: 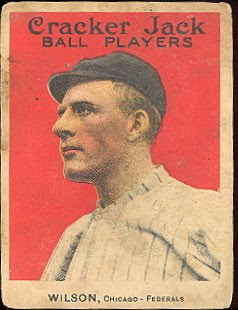 At the time, players' contracts routinely had a "10-day clause" allowing owners to give a player ten days' notice that he was going to be released outright. White Sox first baseman Hal Chase decided to use this clause against Chisox owner Charles Comiskey and gave the team ten days' notice before jumping to the new league's Buffalo franchise. Joe Tinker and Mordecai "Three Finger" Brown were other early defectors to the new league. The new league had an immediate effect on the other two major leagues as well as the minor leagues. Team owners were forced to open up their wallets in order to keep key players. Ballplayers were quite happy with the increased salaries, and welcomed the prospect of the increased competition.

As the Federal League started its 1914 season, it had eight teams: the Baltimore Terrapins, Brooklyn Tip Tops, Buffalo Blues, Chicago Whales, Kansas City Packers, Indianapolis, Pittsburgh Rebels, and St. Louis Terriers. The 1914 season was exciting, with the pennant race going to the final week of the season. Indianapolis edged out Chicago by a game and a half. Several previously unknown players took advantage of the opportunity to play, like Benny Kauf, Dutch Zwilling, and Eddie Roush.

To draw fans into the stands, Federal League owners tried some innovative methods. Chicago owner Charles Weeghman allowed fans to keep any foul ball hit into the stands.At that time, foul balls were considered property of the host club and fans were expected to give balls back to the usher when they came over to retrieve them. Those who refused were sometimes arrested. Also, the Buffalo team offered ownership to its fans; preferred stock in the team cost $10 a share and were offered in newspaper ads. 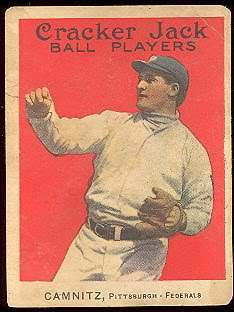 After the season, the Federal League enticed more stars from the other 2 leagues and even signed Washington Senator ace Walter Johnson, as well as A's stalwart Eddie Plank. The signing of the "Big Train" was an immediate boost to the new league, but Johnson never played for the Whales. According to legend, Johnson signed to play for Chicago and received a $6000 signing bonus, but was talked out of going through with the deal. Unfortunately, he had already spent the bonus, so Senators owner Clark Griffith tried to get the money from A.L. President Ban Johnson. When Johnson refused to pay, Griffith went to White Sox owner Charles Comiskey, a legendary tightwad. Convinced that it would be better for Chicagoans to see Walter Johnson filling the seats in his stadium rather than having those customers attend games at Weeghman Field, Comiskey came up with the six grand and Johnson voided his contract.

In addition to the player changes, one team changed location. Indianapolis may have won the 1914 Federal League pennant, but it was not profitable. The team moved to Newark for 1915 and became the Peppers. It was an attempt to break into the New York City market and made for another innovation...doubleheaders were scheduled that season between Newark and Brooklyn, with one game played in each team's park. There were three such doubleheaders that season (Memorial Day, July 5th and Labor Day). Brooklyn was considering scheduling night games during the 1916 season, which would have been the first major league games played under lights.

The 1915 season featured one of the tightest pennant races ever seen in major league baseball. Once again, the race was not decided until the final week. Chicago won the pennant, but four-thousandths of a percentage point separated the top three teams.

As the 1915 season ended, the American and National leagues hoisted a white flag. The Federal League had taken a toll, not only by taking players away, but also by drawing fans away. Representatives from all three leagues met and agreed to dissolve the Federal League. All the players who had jumped to the Federal League would be allowed to return without penalty and Federal League owners would be compensated for the loss of their teams. All owners were treated differently, however; some were allowed to buy existing major league teams, some were offered large settlements, and the others were offered small sums. The owners of the Baltimore franchise were not pleased with the result and sued Organized Baseball in a case that went all the way to the U.S. Supreme Court.

The Supreme Court found for the defense, claiming that baseball was a game and not interstate commerce, subject to the principles of free trade. This gave Major League Baseball exemption from anti-trust legislation, a status it enjoys today. 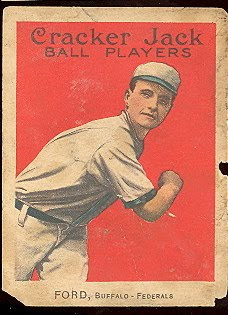 One of the owners who benefited greatly from the dissolution of the Federal League was Charles Weeghman, the owner of the Chicago Wales. He was allowed to purchase the crosstown Cubs and moved his new team to Weeghman Field for the 1916 season. The field was renamed Wrigley Field, and the Cubs still call the park home. It appears he continued his foul ball policy when he joined the National League.

Some players who stood out in the Federal League went on to have decent careers. Benny Kauf went to play for the New York Giants until 1920 and gained some respectable numbers. Eddie Roush went on to the Reds, sparked them to the 1919 World Series, and is enshrined in the Hall of Fame today. Hal Chase joined him on the Reds, but quietly retired a few years later after being suspected of throwing games and consorting with gamblers. Another former Federal League player who left the game under a similar dark cloud was Chicago Whales ace Claude Hendrix, who went on to play for the Pirates. Neither Chase nor Hendrix were officially banned for life like the eight Chicago "Black Sox" players who were accused of throwing the 1919 World Series, but both left the game at the same time as the Chicago players and never returned.

Dutch Zwilling, who had been a standout, played for the Cubs in 1916 and never played in the majors again. Also returning to the Cubs for the 1916 season and then retiring were veterans Joe Tinker and "Three Finger" Brown. Many other former Federal League players were unable to stay on with any major league teams and went back to the minors.

When modern players threaten to use whatever means they can to force a better deal, few know about the Federal League. Though the league was short-lived, its impact on baseball was felt then and is still being felt now.


Author's note: Much of the information I used in this article was pulled from a web site devoted to the Federal League. History, league standings, team photos, ball park information and player statistics are a few items that can be found on this superb site.  It's a great reference for anybody interested in the Federal League.
Posted by Chris Stufflestreet at 8:45 AM