I was looking around the internet the other day and came across something I'd like to chime in about for a moment and venture away from sportscards for a little bit.

I became a collector of cards late in 1978. I had just turned 6 and -- like many kids of that era -- was engrossed by a phenomenon called Star Wars. I had all the Kenner action figures (but not the bigger ones because they were deemed to expensive by my parents) and a couple of the playsets. At the time, my father was moonlighting at a nearby 7-11 store and brought home a pack of Star Wars cards for me. And I was promptly hooked.

When I began collecting, Topps was selling its third series, the ones with yellow borders. After breaking open a few packs and playing with the cards as only a 6 year-old can, I was naturally curious about why the cards numbered from 133-198. There had to be others, so asking a few of the neighbor kids I quickly found out that there were Star Wars cards with red borders and blue borders as well! And that revelation began a trading frenzy.

As I grew up, I did a lot of things with those cards. I took them and recreated the film, with the cards in their aired "sequence," I used them as models to pose my action figures, I grouped them by actor/subject, and when I was tired of that, I'd simply put the cards back in numerical order.

As you might guess, the poor cards didn't exactly handle such loving abuse at the hands of its young owner well. Many show their scars to this day: 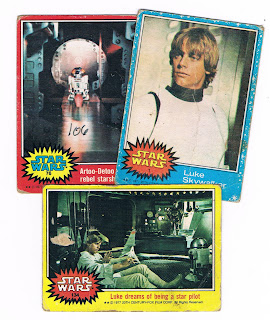 If you're wondering about the number "106" shown below the R2-D2 card...one of my neighborhood chums used to write numbers on all the cards he owned, and ended up trading some of them to me later on. The blue-bordered Luke Skywalker card was the #1 card of the set and was especially manhandled (the image doesn't really show the crease that runs down the center of the card). The yellow-bordered Skywalker card was very well one of my original stash. There's a section of paper loss to the left and the corners have long since lost their sharpness. Even though replacing/upgrading these cards won't cost me a whole lot...I don't really want to. Just opening my binder and looking at them takes me back. I'd rather see the exact pieces of cardboard that gave me such joy as I retreated into my little fantasy world back then than looking at antiseptic cards that weren't with me in those days. Values be damned, I love these cards.

While collecting these cards, I continued picking them up as Topps issued Series 4 and then 5 as 1979 wore on. Among the ones I picked up at the time was apparently not really for the eyes of a kid my age. The card in question was #207, which showed C-3PO as he emerged from the lube bath his first night at the Skywalker home: 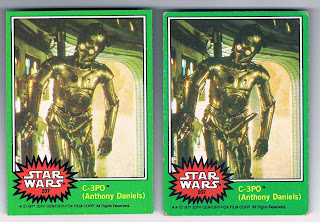 As you might have guessed...the one on the right was the "controversial" one. I had it as a kid (note the corner wear) but at 6-7 years old, I think the "wow, he must have really enjoyed that lube bath" jokes weren't really anything that came to mind for me. In fact, during the years I really would've noticed that (12-16 or so) the cards had been put away while I focused on baseball cards. There are a lot of rumors about this card -- a disgruntled LucasFilm employee, a Topps prankster who got fired, a "light effect," whatever -- but I'm not sure anybody will really know how the card showed Threepio with an appendage that really isn't necessary for a droid. I picked up the corrected copy on the left for a quarter last year. As for the "dirty" card, there are people asking ridiculous amounts for it, even though it really isn't scarce.

I finished my base set in 2002 by trading for the last few cards I needed. Once I finished that (and eliminated any desire to open them), I picked up some unopened wax packs: 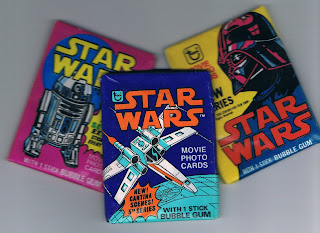 The R2-D2 pack is Series 2, Vader's profile is a Series 3 pack (the first of any type I ever opened) and the X-Wing fighter is from Series 5. I'm still looking for unopened Series 1 and 4 packs. I also need several stickers from 4 of the series and a wax wrapper from Series 4. If anybody happens to be holding on to some or has extras, drop me a line. I'm seriously looking to pick them up.

Sorry to detour from talk of vintage sportscards for this post...but the fact that these cards take me back to that moment in time whenever I open up the binder is one of those things that keeps me collecting today.
Posted by Chris Stufflestreet at 8:30 AM