Ending The Week With an Interesting Card

Since my other posts this week have involved 1954 Bowman cards, here's one that I have always found interesting: 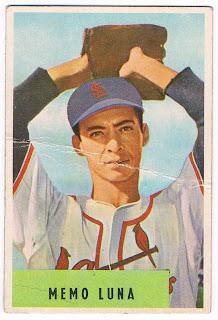 Card #222 -- Memo Luna, St. Louis Cardinals
The name is awesome, the uniform is obviously airbrushed and the crease that runs through my card makes it even more unique (in my opinion). However, that's not the only interesting thing about this card...take a look at the back: 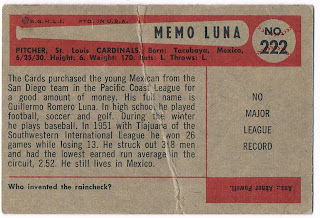 NO MAJOR LEAGUE RECORD!
Imagine being a kid in 1954 who pulled this one out of a gum pack. I'd have probably bent it in half too.

His real name was Guillermo Luna and he ended up appearing in only one major league game, on April 20, 1954. Luna didn't make it out of the first inning. He started off by walking Bobby Adams. Roy McMillan then doubled to center, scoring Adams. During the play, he moves over to third on an error. After getting Gus Bell to fly to right, Jim Greengrass hit a sacrifice fly which scored McMillan. Then, Ted Kluszewki clubbed a double and Johnny Temple walked. Eddie Stanky walked out and took Memo out of his misery.

Despite taking a loss and racking up a 27.00 ERA in less than one inning of work, Luna pitched for nearly 20 years between Mexico and the U.S. He is a member of the Mexican League's version of the Hall of Fame.
Posted by Chris Stufflestreet at 8:30 AM