(For a more detailed look at this set, check out the 1956 Topps page at my Vintage Baseball Cards Website.)

1956 Topps is often found in the "Top 10" lists of  collectors' favorite set designs, and it's easy to understand why.

First of all, the cards have a terrific appearance: 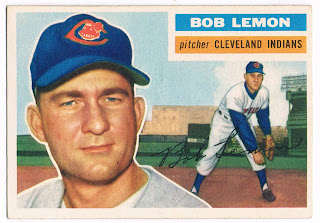 Card #255 -- Bob Lemon, Cleveland Indians
Not only do the cards feature that classic "painted" look that their 1952-'56 cards show, but you get a full-color background behind the smaller "action" shot. Those elements combine to make what can be considered a work of art on a piece of cardboard.

Speaking of cardboard, the set was printed on two different card stocks. Here's what the two look like side-by-side:

Card #9 -- Ruben Gomez, New York Giants
In order to see better the differences between the cards, click on the image. It will open up on a larger screen to give you a much better look. The first two series cab be found with both types of backs...Here's where it gets a little complicated.

Cards 1-100 are more commonly found with white backs, but gray backs are more plentiful from 101-180.

For the first time, team cards were included in the 1956 Topps set: 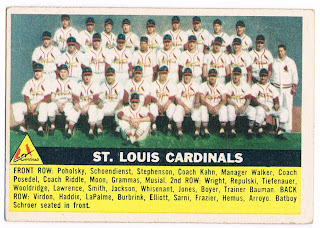 Card #134 -- St. Louis Cardinals Team card
This was as close as Topps would get to having Stan Musial in their set (he's at the very right in the front row).

Six teams in the first series (Cubs, Phillies, Redlegs, Braves, Indians and Orioles) have three different front variations...in addition to the gray/white back variations. "Master" set collectors probably curse Topps for having to chase them all down.

The first two cards in the set are devoted to the league presidents: 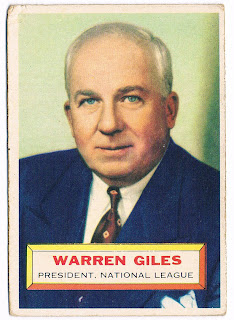 Card #2 -- Warren Giles, N.L. President
Considering Topps issued a separate set in 1956 for U.S. Presidents, it would have been interesting if they'd have used a similar design; instead, they made the name look like it was part of a nameplate with beveled edges. Cards of old men in suits weren't probably well-received by the kids in '56. 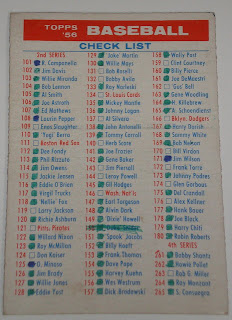 These were inserted into wax packs without numbers, so they aren't considered part of the base set. As a result, many of them were tossed away by collectors who didn't need another one. As for the ones they kept, many were marked up like the one above. The result was a very expensive card today.
Posted by Chris Stufflestreet at 8:30 AM