As a team collector, I occasionally get a couple of items from other collectors that I wasn't expecting.

Back when the football sets Topps issued were a lot smaller (132-160 cards), there were fewer players available to include and usually didn't get the series treatment that baseball sets did. This -- along with the fact that it took an entire year for players to be shown with their new teams -- sometimes called for collectors to make their own "updates" as they needed. 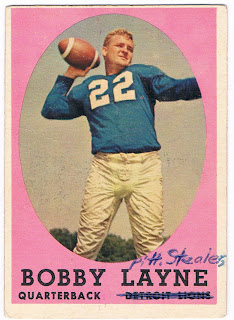 1958 Topps #2 -- Bobby Layne
Early in the 1958 NFL season, the Detroit Lions traded their quarterback Bobby Layne to Pittsburgh, which was then a perennial loser. That was likely a blow for a player who had just QB'd his team toward a championship (though Tobin Rote took over at the position late in the '57 season when Layne was injured). Since the cards showing Layne with the Steelers wouldn't arrive until 1959, that was a minor problem for a fan and his ballpoint pen.

As far as him still being in a Lions uniform, that wouldn't matter...since Topps showed him in a blue jersey in both 1959 and '60.

I'm guessing a Lions fan wrote this, based on the way he spelled the team name.

Then there's the player who was skipped over from having a card, like this Hall of Famer: 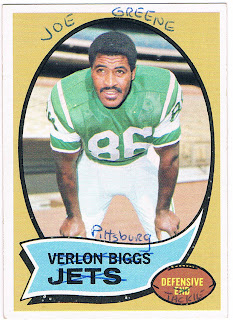 1970 Topps #3 -- Verlon Biggs
Joe Greene's rookie season was in 1969, and he immediately became an impact player. In 1970, he was an All-Pro player. However, he didn't get a card in the 1970 Topps set, due to the fact that few defensive linemen could get priority over quarterbacks, rushers, receivers and linebackers. That, and the little fact that the Steelers went 1-13 in '69.

Undaunted, a young fan took a card of a player who looked a little like Joe Greene, penned in his name...and team city...and corrected the position.

Fortunately, Joe Greene would never again be left out of a Topps set. Beginning in 1972, the company's football sets were expanded to allow a lot more players who weren't "impact" players.
Posted by Chris Stufflestreet at 8:30 AM