Here's another vintage card item that is supposedly common, but it's not as well known to newer collectors: 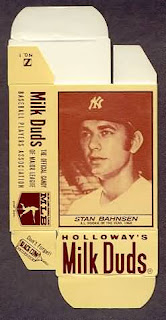 This is a complete five-cent box of Milk Duds from 1971. As you can see, each box featured a player's picture on its back panel.

There were 72 cards in all. They were given a numbering sequence where three players shared a number between 1 and 24. For example, Frank Howard, Fritz Peterson and Pete Rose were all card #1. Card #24 can be Danny Cater, Harmon Killebrew or Jim Perry. Hobby guides simply use suffixes of A, B, and C to simplify the system, where the three players are listed alphabetically. The Stan Bahnsen card shown above is listed as 9a in the checklists.

The card number is shown on a flap (not shown in the image above). It would be on the other side of the flap on the upper right hand corner. This can be seen in the photo below: 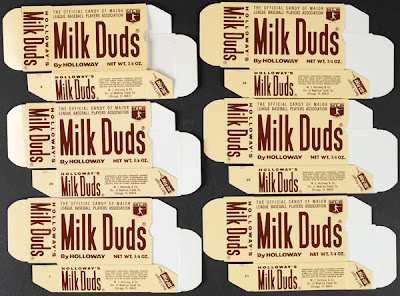 (Click to see a larger image)
1971 Milk Duds can be collected as entire boxes or as cut cards. They are plentiful enough in their original form that collectors prefer them complete, so cards that have been cut -- even neatly -- have their value slashed.
Posted by Chris Stufflestreet at 8:30 AM