These are matte finished, in color, fair condition, etc. Found with other documents dated 1905. Any ideas of value, etc.?" 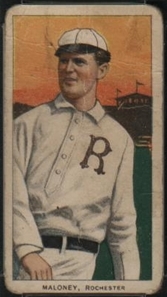 Assuming they aren't reprints (and setting the other documents aside for a moment)...

The most common cards of that era are T206 White Borders, which were issued between 1909 and 1911. I'm guessing that's what you have because your cards have both major and minor leaguers.

Here's a Web page describing the set in further detail.

That should give you a better idea of what you have.

As for value...Hugh Jennings is a Hall of Famer so his card will be worth more. However, the value will depend on things like what back advertisement it has and whatever its condition is. That said, the market for your cards is decent and if you were to sell them, they should rake in some good cash as long as they're genuine.
Posted by Chris Stufflestreet at 8:30 AM