With the ugliness of the NFL labor negotiations out of the way, the teams are once again beginning the preseason and will officially start the 2011 pro football season next month. With that, let's take a quick look at some football cards from the 1960s.

Topps had been making NFL football cards since 1956, when the company bought Bowman. Their string of NFL sets ran through 1963 (in '61, they issued a set with players in the AFL as well), but a backroom deal caused Topps to lose the rights to NFL players beginning in '64. Fortunately for Topps, Fleer was getting out of the sportscards business and the rights to the AFL kept them in the business of making football cards for the next four years.

During the next four seasons, the NFL players appeared on cards issued by the Philadelphia Gum Co., a maker whose previous sets included a 1948 set called Sport Thrills. For the most part, all four years featured a similar design, with some minor adjustments along the way. 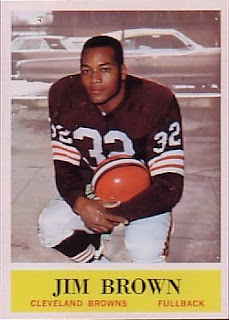 1964 Philadelphia -- Jim Brown
I featured the Jim Brown card here to show the pink Cadillac that appeared on all of the Cleveland Browns' cards in 1964. There are hobby rumors stating that the car was Brown's, or that it was from a dealership that Brown owned, but others say the photos were simply taken near the Municipal Stadium parking lot.

To my eyes, the photo looks like Brown has been superimposed over the background, but I digress...

All other teams have regular (on-field) backgrounds. Otherwise, there is a solid-colored block with the player's name, team and position at the bottom of the card. 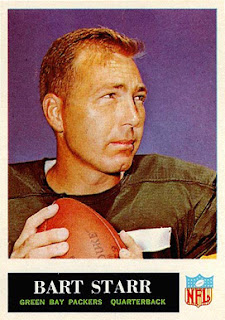 1965 Philadelphia -- Bart Starr
In 1965, the solid-colored block was still at the bottom with the same info, but this time an NFL logo was added to the card. The box was shortened to fit the logo. 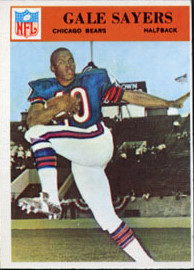 1966 Philadelphia -- Gayle Sayers
In 1966, the box was placed at the top of the card, with the NFL logo placed inside. 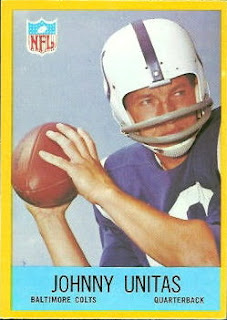 1967 Philadelphia -- Johnny Unitas
For 1967, the NFL logo stayed at the top, but the solid-colored box (still resembling the 1964 format) was returned to the bottom of the card. The other main design change is a bright yellow border around the card.

Topps regained the right to NFL players for 1968 and issued sets with players from both leagues until the AFL/NFL merger in 1970. Ironically, that was the same time the company lost the rights to show helmet logos...but that's a topic for another entry in the future.