This has been one of my most common questions:

"I have a card from the T207 set of Lewis, Boston. It's the variation with no patch. I see where it originally had a $700 value, but what is it worth today?" 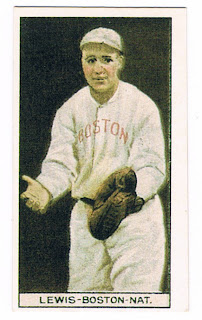 (Here's an image of the card...I'll identify it in a minute.)

The first thing that looks out of place is the part about how it "originally" had a $700 value. How did that information become available? The answer: "It was written on the back of the card": 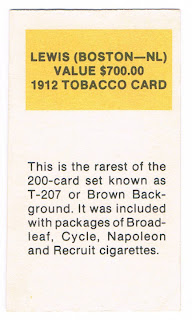 This is one of five cards that were reprinted and included in Hygrade hobby kits during the 1980s. Besides this card, there were three T206 cards (Wagner, Plank, "Magie") and a 1933 Goudey Napoleon LaJoie that were reprinted. They were even found with different-colored blocks on the back: the yellow one above, green or red. They were changed to reflect price increases as the 1980s went on.

An authentic T207 card will feature a writeup about the player and an advertisement of one of teh cigarette brands mentioned above. Any vintage card that has an explanation that it was rare...or has a price given on it...is not a real card.

Today, there are cards with manufactured scarcities (serially numbered, "1-of-1" cards, etc.), but they didn't play those games with cards that long ago.
Posted by Chris Stufflestreet at 8:30 AM