More 1954 Bowman Cards in the Mail

This brings to mind the question: should the plural of Bowman be Bowmen?

In any case, I've recently added two more 1954 Bowman cards to my collection...and my wantlist for that set has finally dropped to under 100 left.

While these cards feature players representing the teams that made the 1954 World Series, neither player managed to actually play any big league games at all that year: 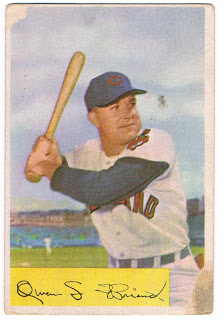 Card #212 -- Owen Friend, Cleveland Indians
Owen Friend never managed to get out of the minors in 1954. Cleveland was the third of his five major league teams, and he was only with the Tribe for the second half of 1953. After failing to make the parent club, Cleveland sold him to the Red Sox after the '54 season. He played with the Sox as well as the Cubs in '55 before going back to the minors for good after '56.

A minor league skipper and major league scout after retiring, Friend passed away in 2007. 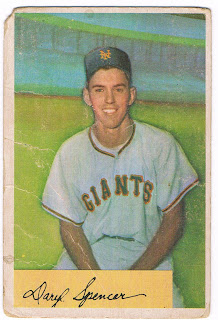 Card #185 -- Daryl Spencer, New York Giants
As for Daryl Spencer, 1954 saw him take a two-year sabbatical from baseball to wear an entirely different uniform. His Uncle Sam had other tasks for him.

A utility infielder as a major leaguer, Spencer was one of the first American players (rather, American players who weren't of Asian heritage) to make a career playing in Japan. After eleven seasons in the major leagues, he played several more for the Hankyu Braves before retiring in 1972.

Spencer is still alive today, and is a well-regarded signer for fans who send cards and letters to him.
Posted by Chris Stufflestreet at 8:30 AM