The National...Loot and Other Ramblings

I returned back home from Chicago yesterday and now need to cycle out of the "Hobby guy" persona and remember what it is that I do when I have to go to work.

I am pretty sure the experience of helping a seller like Irv Lerner was positive...the show wasn't even half over before Irv told me he would like for me to do it again in Baltimore next year. That was a great feeling knowing that a grizzled Hobby veteran saw something in me.

I am also finding out that I have more Hobby friends than I thought i did. While I was amazed to see other Hobby legends and long-time dealers stopping by to talk with Irv...there were also several who stopped by the table to shake hands with me as well. That included other bloggers like Darren from the Indianaland blog, Matt from the #5 Collection blog and Mike from NearMint's Vintage Football card blog.

Now that I've been on both sides of the table, I can't tell you which is tougher...trying to get to each table and seeing what is available without spending money...or seeing everything around you and not being able to hit much of it because you have a job and need to stay behind a table.

I did get to take a little time to check out other tables, but it was limited. So, my wife went on a couple of days and looked around for me. That serves two great purposes: first, she is a lot better than I am at snagging a deal, and she isn't going to complain about how much was spent. Here is probably the top hit of the show for me: 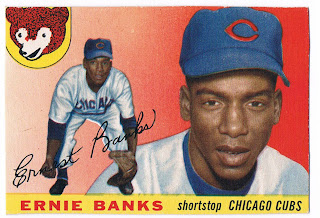 She also found these for my Steelers collection: 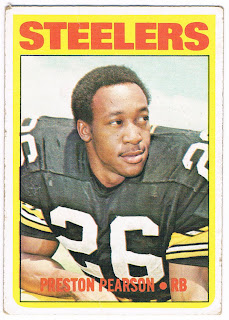 1972 Topps Football #306 -- Preston Pearson
This high-numbered card did two very important things. It finished off the 1972 Steelers set (my birthyear), and it finished off the Topps run of Steelers base cards from 1956-'90. I had been trying to find an example for under $17...Ellen picked it up for $8.
There were only two Steelers in that tough '72 3rd series, and neither was an All-Pro or Pro Action card. 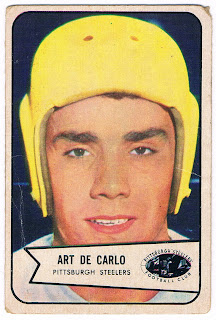 I love the look of the old helmet they used before the days of face masks. DeCarlo was one of two Steelers included in the tougher mid-series run of cards in 1954. Ellen also picked it up for $8...and that closed the wantlist for my 1954 Bowman Steelers set.

Now that my Steelers wantlist has gotten shorter, I have become accustomed to only getting one card at a time. It's really something when I can complete two team sets in a single show.

One of the other reasons I enjoy going to The National is the way I can get to meet with other Hobby people. That includes members of groups that include me as a member. One of those groups is OBC (Check out their website), an organization of "old school"-style collectors who always have a swap session after the show ends on Saturday. As usual, the group members settled down in a hotel lobby, ate pizza, looked through each others' dupes boxes and talked about all types of things: sports, life, hobby, kids, jobs, etc. This year, I did more talking than looking.

One of the members who came all the way over from Scotland stopped over and asked me if i was working on the 1956 Topps set. I said I needed fewer than 60 cards...so he gave me this: 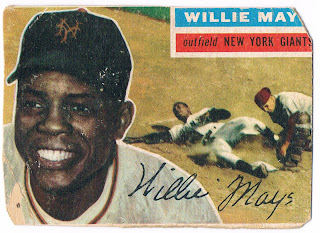 1956 Topps #130 -- Willie Mays
Once again...yes, it's trimmed. However, when it comes to my collection I believe that a hole in the card is better than one in the binder. More than that, it removes a really big name from the list.

I took some pictures from the show floor, but an having trouble finding my cord to transfer files from my camera to my laptop...Hopefully it'll show up soon so I can show the showcase full of Old Judge cards at David Levin's table (David's Website has his inventory), along with the dozens of high number 1952 Topps. What's funny...I have been a Facebook friend of David's ever since I got on there and have been getting emails from him for 10 years since I bought a bunch of his stuff on eBay. We met for the first time in person on the "L" train after he went to a Yankees/White Sox game (I was coming back from a dinner downtown) and talked about the Dodgers, steroids, 19th Century cards and carried on like we'd known each other for years. That's one of the neat ways our Hobby has been affected by the Internet: two total strangers can meet and immediately be like two old acquaintances.

Since I now have a job at next year's show in Baltimore, hopefully I'll get the chance to meet more hobbyists there. In the meantime, I plan to keep on with the info in these posts.
Posted by Chris Stufflestreet at 8:30 AM