For the first time, I am experiencing the National from a very different vantage point...behind the table. (The site of The National...and my home of the next few days)
This time, I'm helping out at Irv Lerner's table. Irv is a long-time hobby veteran, who was a collector going back to 1948 and has been selling cards for longer than I've been alive. A Philadelphia native, he had friends at Bowman and Fleer and bought cases of Topps cards over the years. The contents of many of those cases now sit in his binders and are in very nice condition. He also has an extensive inventory of T-cards with rare backs, as well as 1930s/40s gum cards, Exhibits of all types, test issues and inserts. There are baseball, football, basketball and hockey cards, as well as non-sports subjects.

Fortunately, I'm versed enough in most of those issues and can handle questions that are asked about them. In the past couple of days, I've explained how Green Tints happened in one series in 1962, why several Topps sets from the 1970s can be found with one or two asterisks, why Topps went to an all-AFL football lineup in the mid-1960s and even explained how 1951 Topps Magic football cards came with a scratch-off back that "hid" the player's college. However, Irv has some hobby info that makes me look like a rank amateur by comparison.

It's a great opportunity to be able to get some insight from such a Hobby stalwart. Everybody knows him, he was a mentor to Hobby bigwigs like Bill Mastro and Rob Lifson when they were still teens. Say what you want about those two...but they're incredibly knowledgeable and Irv was one of their earliest teachers.

As far as his inventory goes, I'm up to the task of helping sell it. However, even a grizzled old hobby guy like myself finds it hard to not get nervous handling a 1948 Bowman George Mikan basketball card (price tag: $7000).

Being behind the table has kept me from getting out on the floor too often. However, I still got to see a little excitement. On Thursday morning, I looked up to see several Federal agents and postal inspectors walking past like they had a major purpose (that's a term I learned in the Army). And a few minutes later, we got to see this: 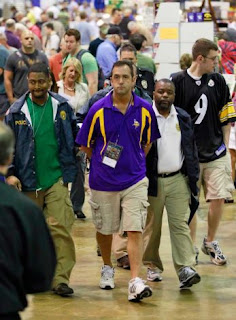 (Picture borrowed from the newspaper article linked below.)
Evidently (or should that be "allegedly," as the man shown above is still innocent until proven guilty in court), a seller had been selling fake jerseys and claiming them to be genuine game-worn gear. Read the story at TimesUnion.com. While part of me likes to see the authorities deal with sellers who damage the name of our Hobby, the cynic in me assumes it'll be the only one of the show; a quick, easy headline to grab that will make somebody show that they are "tough" on those who don't deal straight. However, the uncomfortable truth is that if the Feds really look at some of the dealings going on in the Hobby (especially the memorabilia side of it)...there would be a lot of activity like this.

I did manage to sit in on a panel discussion from Topps, where I got to hear pretty much what I expected: the corporate line on several issues that mainly pertain to sellers of current material. When the Q&A session began, the best question asked was by a kid named William, who seemed to be about 12 years old. Once he asked it (it was about trading virtual prizes online), several people in the room applauded him for it.

There were some drawings and even some trivia questions...and one the questions was answered by Yours Truly. In reference to the question: "What was the number of Mickey Mantle's 1954 Topps card?" The one vintage guy sitting in the audience (me) raised his hand saying "I know that one..."

It was a trick question. There was no card of Mantle issued by Topps in 1954. There was a mock one that appeared in an early issue of Sports Illustrated, as well as others with the design that appeared in retro sets beginning with Topps Archive in 1993, but there was no Mickey Mantle card issued in the Topps base set in 1954.

So, I was the winner of this box: 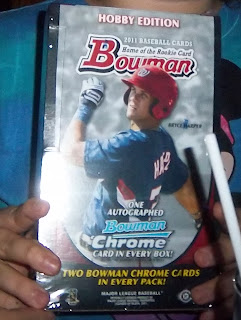 (See? There's still room for modern stuff on this blog)
This Hobby box of 2011 Bowman, which is shown in the hands of my 12 year-old daughter (not at the show then, but out enjoying Chicago with her mother). I still believe that the Hobby should be enjoyed by kids, so selling it for a quick buck didn't even cross my mind as long as I knew a kid who would be happy to have it. She was happy to rip it as soon as we returned to the hotel last night.

Keep a watch over the weekend, as I'll have a couple of extra reports on days I don't normally post.
Posted by Chris Stufflestreet at 2:41 AM