Hall of Fame catcher Gary Carter passed away last week. Although most of his cards appeared outside of the time frame focused on in this blog, he still had some that did. Rather than rehash what others have said, I'll just let the others speak.

His first card appeared in the 1975 Topps set, as a multi-player Rookie: 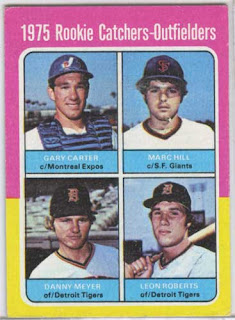 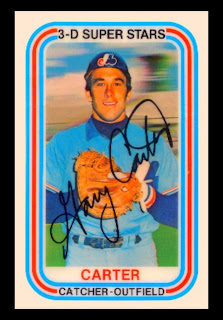 Soon after that, Big Hair and Plastic Grass featured this 1976 Kelloggs' card in its own tribute. The site is written by Dan Epstein, who has written a book about baseball in the 1970s and does a better job of saying what I would have come up with. 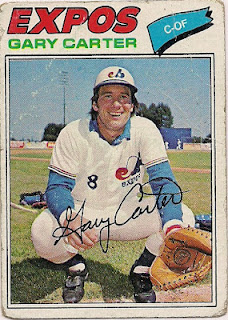 Of course, Night Owl also writes for a living...and offered up this post that examines the inevitable feeling of mortality that seems to accompany these sad bits of news as we get older. I was in the ninth grade the year the Mets won the World Series. Seeing the leader of that team pass away from cancer certainly makes me think.

But the reason I really need to mention "The Kid" in this blog is outlined on this little factoid that was placed on the back of Carter's 1981 O-Pee-Chee card in two languages. 1967ers from Diamond Cuts and Wax Stains remembered the decade Carter spent as one of the biggest baseball stars in Canada.

We didn't just lose a Hall of Fame catcher...but we also lost a person who was a fellow collector. One of my long-time collecting buddies is Bob D'Angelo, a Tampa-based journalist who talked with Carter in 1981 about his collection. Here, he shares that story, as well as Carter's reaction to seeing himself on cardboard for the first time in 1975.

Rest in Peace, Kid.
Posted by Chris Stufflestreet at 8:30 AM