Today is Leap Day, which only occurs once every four years. In honor of that, here's an awesome card that was shared with me from a fellow collector named Steve that shows a really distorted image of a true original: 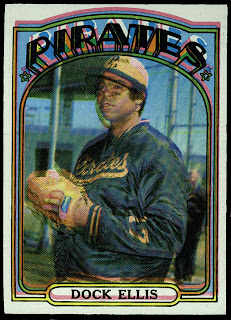 1972 Topps #179 -- Dock Ellis, Pittsburgh Pirates
While cards that feature out-of-register photos are generally viewed unfavorably by collectors, the fact that it is on a 1972 Topps card (which are lovingly called "Psychos" by my friends over at OBC) makes it look like you need a special pair of 3-D glasses to look at it.

Additionally, it's appropriate that the card pictures Dock Ellis, a pitcher who is notoriously best-known today for tossing a no-hitter in 1970 while he was under the influence of a hallucinogenic. Here's the story in Dock's own words:

That video never fails to make me laugh. The guitar lick you hear in it, by the way, is from the 1970/71 song "(Do the) Push & Pull (Part 1)" by Rufus Thomas. It adds with the artwork and the audio effects to give it a humorous vibe.

(As a public service announcement, I need to point out that drugs aren't a laughing matter, and neither is the abuse of them. But the description Ellis gives of the effects he experienced on the field that day are just priceless. That said...kids, don't try that.)
Posted by Chris Stufflestreet at 8:30 AM