Today's post features an item that is owned one of my long-time collector friends:

It's a complete box (with flaps) from 1963 that includes three Bazooka cards on it, including one that shows Willie Mays. Over the years, these boxes have been cut into singles or panels, with complete boxes being harder to locate. For some reason, a number of copies of this particular box have found their way into the hobby and have made this one a lot easier to find. It's been speculated that a warehouse find (or an extra unused case) has been found.

Bazooka was a Topps product, which was on the scene shortly after the end of World War II. In fact, the immediate success of the brand brought some of the extra profit that would eventually be sunk into the company's cardmaking efforts. The familiar comic strip, complete with a send-in offer and a fortune, was wrapped around the gum slab by 1953, and Topps added cards to the multi-count retail boxes in 1959.

This box from 1963 contained 20 pieces of Bazooka gum (with 20 comics), the three cards you see in the picture, and five more cards tucked inside. Those were from a separate set of cards called 1963 Bazooka All-Time Greats. Here's an example: 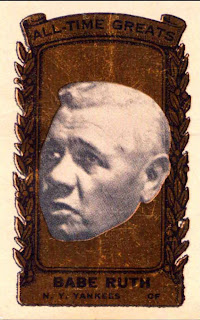 For those of you who thought that gold foil was an element of baseball cards that Topps embraced in the early 1990s, here's proof (along with the 1965 Embossed cards) that they were definitely enamored of the shiny effects well before that.

There were 36 cards in the regular Bazooka set in 1963, and 41 of the All-Time Greats. The All-Time Greats were revisited in 1969-70; in those years, they were placed on the side panels of the box itself. The 1963 cards are distinguished by the fact that they're numbered. The later cards are also missing the gold leaf and have a different design.
Posted by Chris Stufflestreet at 8:30 AM