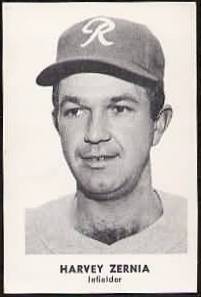 This is from the era when the PCL was largely seen as a "third" major league because there were no big league teams west of St. Louis. While that would soon change, these cards would remain in release for several years after baseball went West.

Measuring two inches by three inches, they were smaller than the "regular" baseball card size. The cards were released each year from 1954 through 1968 and only feature players from the Seattle Rainiers (or Angels, as they were called beginning in 1965). They are called "popcorn cards" because they were distributed along with the boxes of popcorn sold at the concession stands in Seattle's Sick's Stadium.

Generally, there would be about 20 cards each year and would be changed as players came and went. As a result, there is a possibility that "new" cards might surface at some point.

Many years, the cards were blank-backed. However, in 1956 there were two types: a blank-backed card and one that has an advertisement for Gil's Drive-in Restaurant: 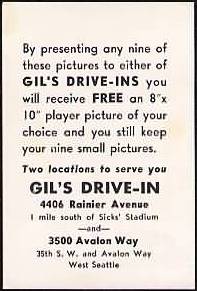 Looks like Gil's Drive-In is still in Seattle, but at a different address today.
Posted by Chris Stufflestreet at 8:30 AM