At one point in the 1970s, three of the four major sports had rival leagues playing against each other. Baseball had its own labor problems, but the other sports had to deal with competition. Basketball had the American Basketball Association, the World Football League took the gridiron and hockey had the World Hockey Association.

The WHA was brought about in part to circumvent two things that plagued NHL players by 1972: first, they were paid the lowest avearge salary of any major sport, and they were also tied to a team for an entire career by a reserve clause. Yes, they could be traded, but that was up to the teams rather than the players. In 1972, players were attracted to the new league by the promise of higher salaries and the elimination of the reserve clause from any contracts. The league wasn't initially considered to be a threat because it attracted college players, retired NHL veterans and the occasional star like Bernie Parent.

However, things changed when superstar Bobby Hull signed up. In an interview, he jokingly said he'd jump to the new league for a million dollars a year, a ridiculously large amount at a time when the average hockey player earned $25,000 a season. The Winnipeg Jets offered him that amount, and he took it. Other NHL stars followed, like Gordie Howe, Jacques Plante and Gerry Cheevers, but the league also scouted for new talent overseas. Europe and the Soviet bloc were largely ignored by the NHL, but were attractive to the WHA.

Collectors of Topps hockey cards might have never even known that another league existed because the company never acknowledged the WHA in any of its sets until the league fell apart. However, the Canadian-issued O-Pee-Chee featured them.

First was the 1972-73 base set. It was the new league's first season and OPC's final series that year included nothing but WHA players: 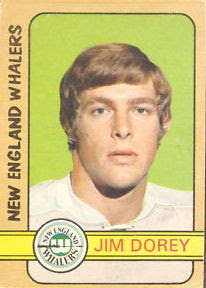 Since there weren't really any pictures of players in their WHA uniforms, they were airbrushed in...and in some cases, they didn't even look to be suited up at all.

For four years beginning in 1974-75, O-Pee-Chee issued separate sets of WHA cards that weren't part of their base NHL set. The first year was a 66-card  that features a horizontal design and a generic team banner: 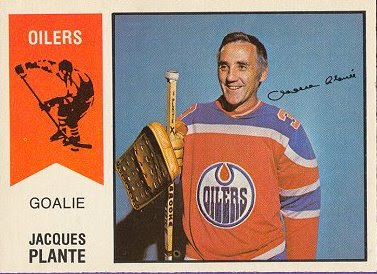 The first card in that set featured Gordie Howe, a legend who came out of retirement to play in the WHA, along with his two sons on the same team. 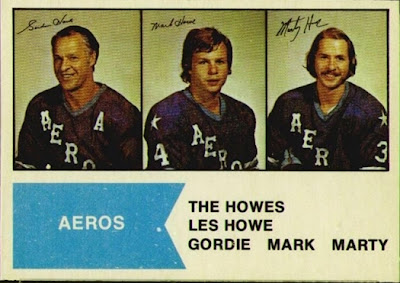 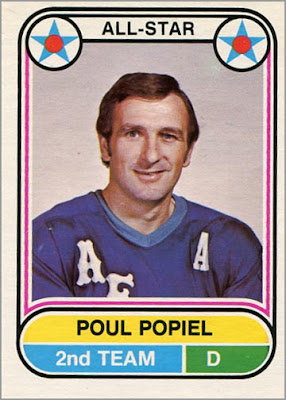 The first and second team All-Star squads ran through the halfway point of the set (cards 61-72). The stars and "All-Star" banner are simply an addition to the base card design.

In 1976-77, the WHA set remained at 132 cards. The All-Stars return, along with six cards showing the league leaders in several different categories and three that recap the postseason games. However, the base cards were given a little more design to look like they're hockey cards: 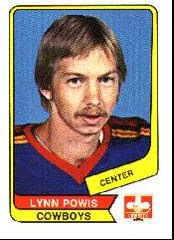 In 1977-78, the WHA set was cut back to 66 cards and all of the subsets (except for the one checklist card that appeared in each of the league's sets) were eliminated. There was one card commemorating Gordie Howe's 1,000th career goal, but the rest looked like this: 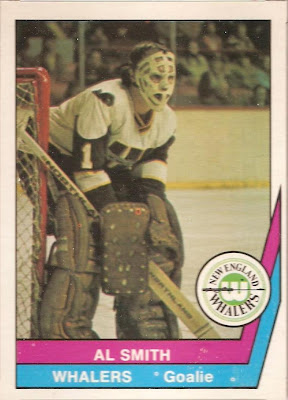 The WHA played its final season in 1978-79. At the time, the league was struggling financially and several of its teams were folding. Sensing their inevitable doom, they tried to negotiate a merger with six teams going into the NHL. Eventually, four teams would make the transition: the Edmonton Oilers, New England Whalers, Winnipeg Jets and Quebec Nordiques. Perhaps realizing the ship was sinking, no WHA cards were issued during that final season.

In 1979-80, the four teams began playing in the NHL and appeared as part of both Topps' and O-Pee-Chee's base hockey sets. In Topps' set, a card was issued that showed the logos of the NHL's newest teams: 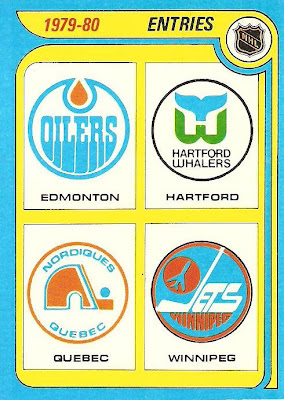 As you can see, the New England Whalers changed their city name. Today, all four franchises are still in the NHL but only Edmonton remains in the same city or has the same team name.
Posted by Chris Stufflestreet at 8:30 AM