What's On the TV Set?

Last week, I showed some cards sent to me by a fellow collector from the 1951 Bowman set. Here are some other cards that came with them from the 1955 Bowman set. There are four in all, and three are Yankees players: 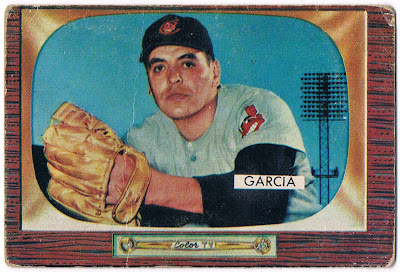 The other card came from the team that had just beaten them for the American League pennant in 1954.

Mike Garcia was known as "The Big Bear" and made up a solid starting rotation of the early 1950s along with Hall of Famers Bob Feller, Bob Lemon and Early Wynn. In '54 he had led the league in ERA and shutouts in what would be his last truly effective year. He remained with the Indians through 1959 and then pitched a season with the White Sox and one for the Senators before retiring.

Born in California and being of mixed Mexican and American Indian heritage, Garcia aspired to become a jockey before he filled out into his 6'1", 200-pound frame. Before playing in the majors, he served in the Army as a signalman during World War II. After hanging up his glove, he stayed in Ohio and ran a dry cleaning business in Parma. He passed away in 1986, on the day of his 35th wedding anniversary.

One of Garcia's later teammates will be remembered by a line drive from this guy: 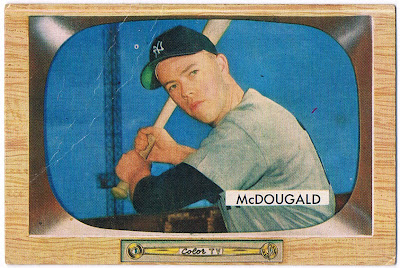 In 1957, Gil McDougald hit a line drive that struck Herb Score in the right eye. Score had been a promising pitcher who tore up the league the previous two seasons, but that was ended by one unfortunate placement of a ball. While things like line drives are part of the game, McDougald was shaken by the incident, saying he'd walk away from the game if Score were blinded. Fortunately, he came back from the injury in 1958 and it was arm trouble (not a lack of vision) that led to Score's decline.

Despite that one unfortunate incident, McDougald was a solid hitter who remained with the Yankees for his entire ten-year career. In that decade, he appeared in eight World Series and was on the winning team in five of them. In fact, when Bill Mazeroski hit that home run to win the 1960 World Series, he ended more than the Yankees' season...it would be the last time McDougald (who was standing near third base) would play in major league game.

McDougald later became the coach for Fordham University's baseball team and passed away in 2010. 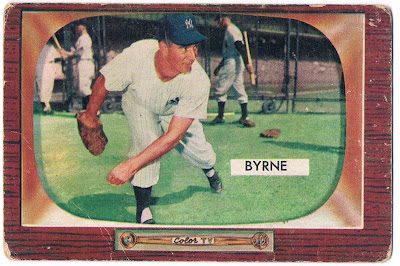 I'm not sure which Yankees players are lining up for their turn in the batting cage in the picture above, but McDougald could be one of them.

Tommy Byrne was part of the Yankee rotation in the late 1940s, earning the nickname "Wild Man" because of control trouble. He led the league in walks issued three times and in hit batsmen five times. He was also dangerous with the bat, hitting 14 home runs and two grand slams. In 1951, he was traded from the Yankees to the St. Louis Browns, a team that lost more than 100 games. After splitting 1953 with the White Sox and Senators, he returned to the Yankees in 1954 and remained with them through 1957.

He had attended Wake Forest, and returned there after retirement. He even served as the mayor of Wake Forest, North Carolina from 1973-'87. He passed away in 2007.

In 1955, Byrne led the American League in Winning Percentage. He didn't lead the team in wins, however. This guy did: 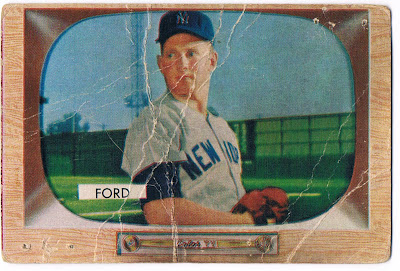 It's not the prettiest card, but it's still welcome in my binder.
Posted by Chris Stufflestreet at 8:30 AM