While I like to focus on the cards and sets that form the main interest of vintage sports cards, it is impossible to build a Hobby without people. So, when a pioneer leaves us, he deserves mention.

Earlier this month, Goodwin "Goodie" Goldfaden passed away at the age of 97. He was one of the few remaining "old school" dealers who were active before the Hobby; in fact, he was a seller of sports-related memorabilia for more than 80 years.

George Vrechek wrote an article about Goldfaden that appeared a few years ago in Sports Collectors Digest which can be read here. This photo appeared in that column and shows Goodie at a California convention in 1976: 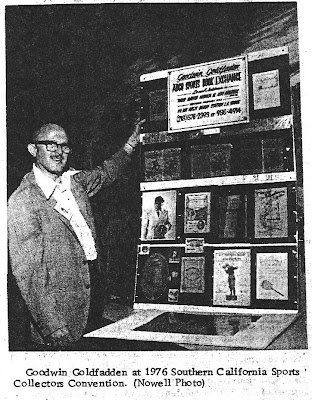 He was one of the first dealers based on the West Coast, and there are some remembrances out there about his small shop on Santa Monica that was only big enough to accommodate a few people at one time. It was remembered that a collector would simply go to the front and tell Goodie what they needed and he would go back into the store and find it.

Though he was one of the early sellers, he didn't seem to consider himself a "pioneer" but simply a businessman. However, his passing still silences the memories of a Hobby back when it was a totally different type of pastime. He'll be missed.
Posted by Chris Stufflestreet at 8:30 AM