A Little Prespective on Hall of Fame "Stats"

I was listening to another argument about who should and shouldn't be in the Hall of Fame recently, after the news broke that Ron Santo was going to be inducted. It reminded me of something I noticed a few years back when I added this guy's card to my 1961 Topps set: 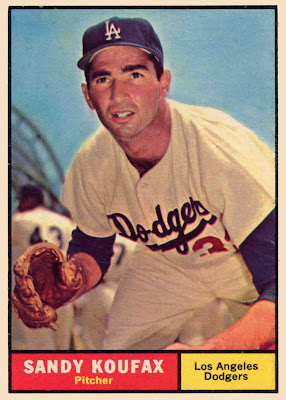 This card was printed about midway through Sandy Koufax's career. He had six major league seasons behind him, and six more before he called it quits after the 1966 World Series. Now, take a look at the back of this card: 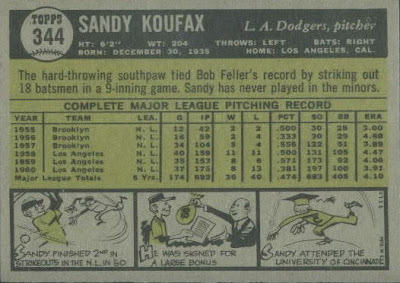 Halfway into a Hall of Fame career, Sandy Koufax had a losing lifetime Win/Loss record. He was 36-40, despite playing on two teams that won the World Series. This isn't the stat line you expect to see in the middle of what we now consider an illustrious career.

Of course, it was what Koufax would do over the next six years (129-47, two more World Series rings, 3 seasons with 300+ strikeouts, 3 unanimous Cy Young awards, 4 no-hitters including one perfect game) that would get him into Cooperstown. Few dispute that he wasn't the most dominant pitcher in baseball between 1961 and '66, but the career stats shown above aren't what you'd expect to see out of a top-notch performer midway through a career.
Posted by Chris Stufflestreet at 8:30 AM