"Stand-Up" and Take a Swing 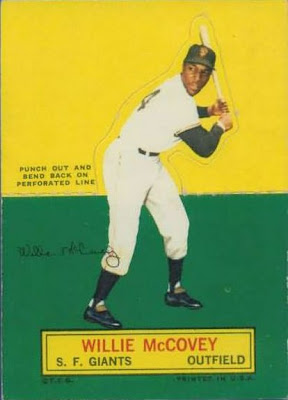 Beginning in 1960, Topps issued a wide variety of cards to be sold on their own, rather than as inserts with their base cards. These are called Stand-Ups, due to the way they were designed. They were die-cut around the player and the top half was perforated to allow the cards to "stand up" after being folded.

There were 77 cards in the set. On the printing sheet, 55 of the cards were double-printed, which made the other 22 cards a little scarcer. Many of the short-printed cards include Hall of Fame players, such as the McCovey card shown above, Carl Yastrzemski, Warren Spahn and Don Drysdale.

Full cards are in the same standard 2 1/2-by 3 1/2 format used for regular Topps cards. As you may have guessed, cards that have been used as they were designed are much less valuable than those that have been untouched.
Posted by Chris Stufflestreet at 8:30 AM