Today's entry goes outside what is normally the scope of this blog. However, the cards aren't found all that often.

Topps is known for occasionally testing ideas for new avenues when it comes to items that featured pictures of baseball players on them. In many cases, the cards were simply a re-introduction of a previous innovation. In 1985, the company issued a set of 30 cards that was a combination of the "Super" cards they issued in 1980 and the Embossed cards of 1965: 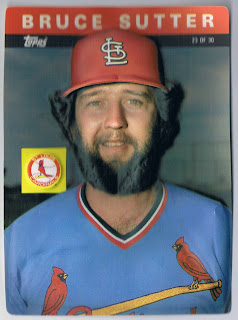 The scanner I used really doesn't do well with items that aren't flat, and I apologize for that.

These cards are from the 1985 Topps 3D set. They are essentially 4 1/4-inch by 6-inch plastic slabs with rounded corners which have the player features raised. The backs are entirely blank, except for a pair of small adhesive strips that allowed them to be stuck on a wall.

The- Bruce Sutter card is a portrait, which really doesn't demonstrate the full effect of the raised area. They called for action shots, as this Rick Sutcliffe card exhibits: 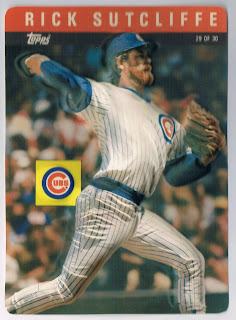 They were originally issued in packs, with one card inside (at a price of fifty cents). They have never been commonly collected, which have kept their prices low. In fact, a sealed wax box can be bought for $8.50 today.
Posted by Chris Stufflestreet at 8:30 AM