Today's post features a card that shows up from time to time but can confuse collectors because they don't feature any identification on them: 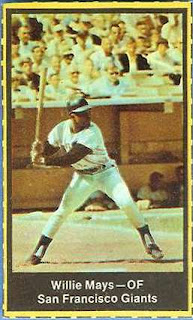 The thin yellow border is the thing that gives these away. This is from the 1969 Nabisco Team Flakes set and is one of 24 cards, including 11 Hall of Fame players (as well as Pete Rose, who had a Hall of Fame career and screwed it up by thinking rules didn't apply to him). Among the players in the set is Tony Horton, who didn't appear on a lot of cards during his career and never in a Topps base set.

These blank-backed cards were issued on the backs of boxes of Team Flakes cereal, with eight to a package. Here's an image I swiped from eBay, which calls the cards "Mini Posters": 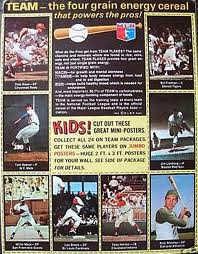 So three boxes was all a collector needed to get a complete set. They corresponded to larger posters that could be ordered separately. Team logos were airbrushed off the helmets and uniforms of the players.
Posted by Chris Stufflestreet at 8:30 AM