This weekend, the Pittsburgh Steelers line up against the Denver Broncos for the first round of playoff action. So here are a couple of cards from my collection of Steelers cards: 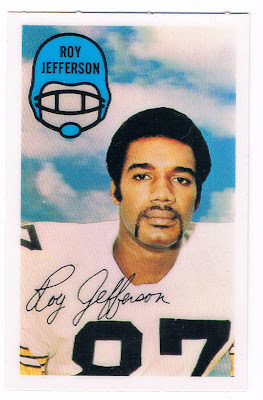 This Roy Jefferson card is from the 1970 Kellogg's set. It could be obtained either inside a box of cereal or through a complete-set box-top redemption. The 1970 set can be distinguished by the blue helmet and the lack of a border. The background is layered and the Xograph process gives it a three-dimensional look.

Here's the back of the card: 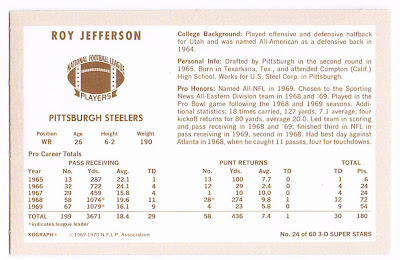 Interesting to see that Jefferson led the league in pass receiving in 1968 and '69, as the Steelers were one of the worst teams in football and traditionally favored a ground attack. That said, these numbers don't include AFL teams, where the most potent passers and receivers were.

The other Steeler among the set's 60 cards includes this quarterback, whose name makes the perennial fourteen year-old boy inside me chuckle: 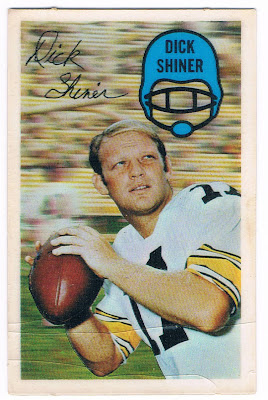 Dick Shiner's card exhibits the cracks that frustrate the more condition-conscious collectors. Since the process used to give the cards a 3-D look are prone to cracking even if the card has been encapsulated, there are collectors who don't even bother with Kellogg's cards.

Here's the back of Shiner's card: 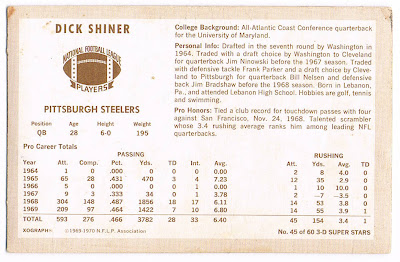 Unlike Kellogg's baseball sets (which ran every year through 1983), the football sets were issued only in 1970 and '71. The '71s are much harder to find, as they weren't available through the company as complete sets as they were in 1970.
Posted by Chris Stufflestreet at 8:30 AM