In the Mood For Some Dessert?

Today's post features a card that was subjected to torture by a young handler bearing a pair of scissors, and still shows the scars from that encounter: 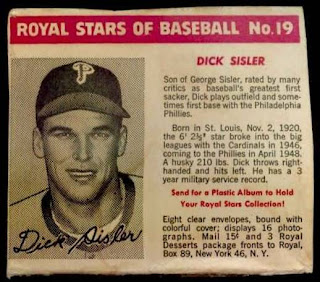 All things being equal, the previous owner could have done a lot worse. Originally, the card made up the back of a box of dessert mix (gelatin or pudding, I'm guessing). The bottom edge of the card shows where the package was folded.

This is from the 1950 Royal Desserts set, which is a misnomer as the set was actually issued over a three-year period. There were 24 cards that made up the base set, but the biographies were updated through the set's run and some players eventually had two, three or four variations. In all, there are 47 different cards for collectors to chase.

Dick Sisler was one of three players with four different cards in the set (Andy Seminick and Ray Scarborough were the others). The variations can be ascertained by the final sentence in the biography, and the military service mention was on what is considered the first variation.
Posted by Chris Stufflestreet at 8:30 AM