I recently had a stack of cards show up in my mailbox from another collector. Included in the stuff I placed into my binders were these well-loved beauties from the 1951 Bowman set: 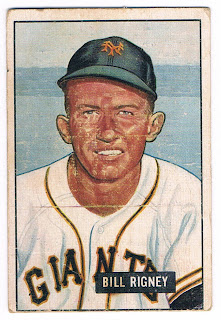 Card #125 -- Bill Rigney, New York Giants
Rigney didn't get to play in the majors until he was 28; however, that was in 1946 and he was like many other players who needed to focus on an entirely different problem for the few years prior. He spent much of World War II in the Coast Guard. Despite the late start, he was a regular in the Giant infield pretty quickly and was quick to pay attention when Leo Durocher became manager in 1948. Once his talent diminished due to age, he would later become a manager himself, leading the Giants during their move West and later with the Angels and the Twins before one last hurrah with the Giants in 1976. 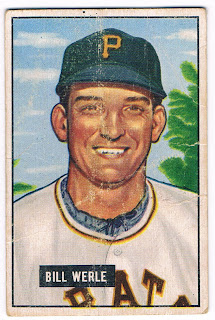 Card #64 -- Bill Werle, Pittsburgh Pirates
Bill Werle was also a World War II veteran (he served in the Army late in the war) and a manager, although his teams were minor league clubs. A PCL star before and after his time in Uncle Sam's employ, Werle broke into the majors in 1949 with Pittsburgh. In 1952, he got a hard time from the team's management and would be traded to the Cardinals in May. After that season, Boston picked him up, and he played with the Red Sox for a couple of years before returning to the PCL. In 1967, Werle was 46 and coaching with the Giants when it was discovered he was only 19 days shy of receiving a players' pension. He was activated for a short time so he could get it. He became a scout after his managing days were over.

Werle passed away in 2010 after suffering from the onset of Altzheimer's. 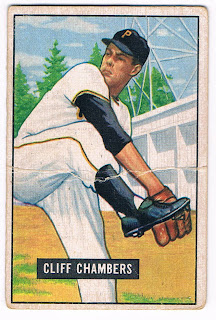 Card #131 -- Cliff Chambers, Pittsburgh Pirates
Cliff Chambers spent World War II in the Army Air Corps, which delayed his big league debut until he was 26 years old. His major league career lasted from 1948-'53...and his lifetime record was 48-53. In 1951, he tossed a no-hitter against the Boston Braves but still found himself traded to the Cardinals mid-season.

Cliff Chambers is still around today and living in Boise, Idaho. He appears to be warming up next to a radio transmitter in the picture on the card. 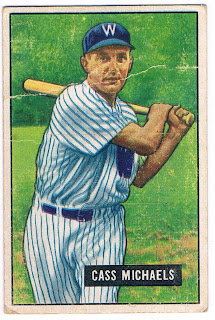 Card #132 -- Cass Michaels, Washington Senators
Cass Michaels' real name was Casimir Kweitniewski, and he played under that name as a rookie in 1943. He was 17 that season, a little young to be called to service. He would spend twelve seasons in the majors -- mostly with the White Sox -- and had recently joined the Senators in 1950. He went back to Chicago in 1954, but a beanball thrown by Marion Fricano left him with blurry vision and ended his career.

He later ran a neighborhood bar in his native Detroit. He passed away in 1982. 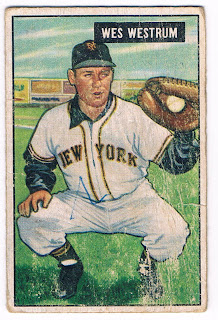 Card #161 -- Wes Westrum, New York Giants
Wes Westrum was also in the Army during World War II. While in the service, he managed a ballclub made up of soldiers from Greenhaven, New York, a place that was not only a disciplinary post, but also served as a POW camp for captured enemies. The experience would be helpful when he became the second manager of the New York Mets in 1965.

In 1951, he was a key component to the Giants team that won the National League pennant. The team's regular catcher, he led the league in baserunners thrown out. He was also the catcher shown on the very first cover of Sports Illustrated magazine in 1954. Sadly, cancer took Westrum in 2002. 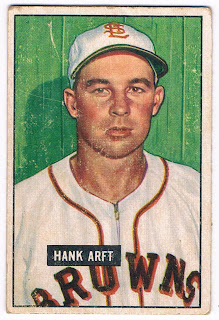 Card #173 -- Hank Arft, St. Louis Browns
Hank Arft's World War II service career saw him in the Navy, where he was on hand in Tokyo harbor during the Japanese surrender on V-J Day. His major league career lasted from 1948-'52 and saw him mostly as a fill-in player. 1951 would be his busiest season in the big leagues. Unfortunately, his career was spent with the St. Louis Browns, a team that would lose over 100 games in '51. He later became an embalmer after retiring.

Sadly, Arft was also claimed by cancer in 2002.
Posted by Chris Stufflestreet at 8:30 AM

Email ThisBlogThis!Share to TwitterShare to FacebookShare to Pinterest
Labels: 1951 Bowman