Orientation...Not that There's Anything Wrong With That...

A couple of months ago, I ran an entry about the 1971-72 Topps hockey set. As part of my position writing content for the Cardboard Connection Website, I am learning new things about sets that I never knew before. Among those are the various hockey sets that were totally off my radar as a young collector but really need to be given more exposure, because the cards have a history that stretches back even farther than football or basketball when it comes to mainstream issues.

Beginning in 1968-'69, Topps and O-Pee-Chee began issuing separate hockey sets. While OPC generally had the larger set and featured many more stars, the designs were largely shared, except that the OPC cards were bilingual and were generally printed on lighter cardboard stock (and had a "Made in Canada" copyright line). There was a big difference in the designs when the 1971-'72 set rolled around. Let's take this card of a legendary goalie: 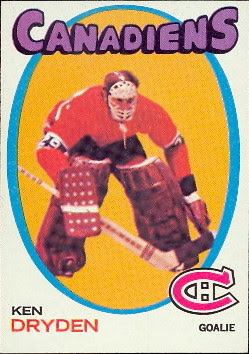 The front design was the same between 1971-'72 Topps and OPC. This card was #45 in both sets. That was common in some years, but it wasn't always a consistent thing.

Now, here's the Topps back: 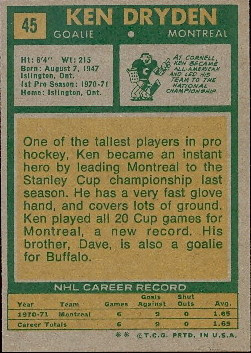 Notice the back is oriented vertically. Since Dryden was a rookie, it's not obvious that the set was the first to use year-by-year career stats on the back, instead of a simple previous year/career line used nearly every year before this. A lot of yellow is used on the back as well.

Now, here's the O-Pee-Chee back: 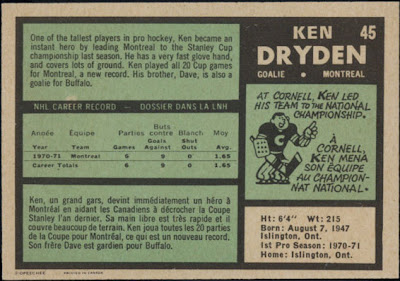 The words are the same, and so is the cartoon. Both have French translations added to the back. However, the back is laid out horizontally, with the elements in a different location. The cartoon is larger and clearer. The stats are similarly year-by-year (though that still can't be seen in Dryden's example). And no yellow at all is used here. It's one of the few cases where Topps' back is brighter than the one used on its OPC counterpart.
Posted by Chris Stufflestreet at 8:30 AM