Last week, I showed a couple of cards that were given a contoured look and mentioned that they were perhaps inspired in part by the 1965 Topps Embossed cards.

The set was inserted into wax packs of Topps' regular cards that year as an insert set. The cards were made on gold foil and were embossed so that the player's image was given a raised contour. There are 72 cards, and each league has 36 players featured. The thing about the set that has bothered some collectors is the way they appear. Here's Brooks Robinson's card, for instance: 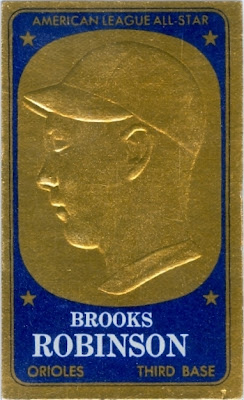 It really doesn't look like him at all. For that reason, it's nice that he's identified on the card. Like all American League players, he's given a blue-colored inset. National Leaguer were given a red inset, like this Hall of Famer: 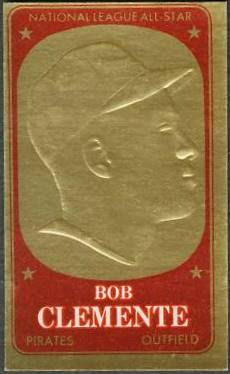 For the record: despite several instances of Clemente being called "Bob" on Topps cards in the 1950s and 1960s, it appears he went by his full name Roberto. And that's what I'm going to call him.

There are a few cards that have been reported to have silver leaf instead of gold (I don't own any, nor have I ever seen one). Due to the way they were made, they show damage pretty easily, which is another reason some collectors have stayed away. However, it's one of those issues of the 1960s that offers a nice chance to complete a set cheaply. There are few cards to pick up, many are really cheap and even the stars (even Mickey Mantle, Hank Aaron, Willie Mays and Sandy Koufax) can usually be reasonable.
Posted by Chris Stufflestreet at 8:30 AM