In its 1955 baseball card set, Bowman got around the problem of not having all the players under contract by issuing cards of umpires in the final series. There were 31 in all, including this one: 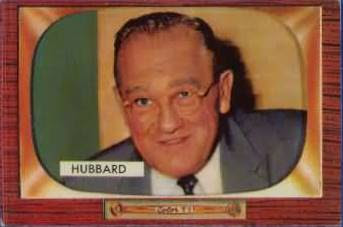 Card #315 -- Cal Hubbard
There's one little thing to note, however: while the other 30 arbiters are shown in those black uniforms they once wore during the games, Cal Hubbard is shown in a suit coat and tie. And he's wearing glasses, which umpires usually get told by fans and managers alike that they need.

There's a reason for this picture. Hubbard had been a major league umpire from 1936 until a hunting accident after the 1951 season damaged the vision in his right eye. He was forced to retire, but was named the supervisor of umpires in 1954. So, he was an executive when this card appeared, which explains the suit.

Before Hubbard took his place behind the plate, he excelled on a gridiron. He was an offensive tackle with the Giants, Packers and Pirates (the team now known as the Steelers) from 1927 through 1936. He was considered to be one of the league's best players, good enough to be inducted into the Pro Football Hall of Fame's inaugural class in 1963. He actually began umpiring in the minor leagues during his playing days, as his "summer job" when he wasn't playing football.

When he was inducted in the Baseball Hall of Fame in 1976, he became the fifth umpire to earn the honor. He also remains the only person who's been inducted into the Hall of Fame in both sports.
Posted by Chris Stufflestreet at 8:30 AM