As part of my ongoing "side job" as a freelance writer working for the Card Connection Website, I come across some really neat designs from time to time. Currently, I am going through hockey sets and just stumbled across the last set Parkhurst issued in 1963-'64. They predated Topps as issuers of hockey cards, and for several years the two companies split up the six teams in the NHL.

And that team focus is part of the design of this set: 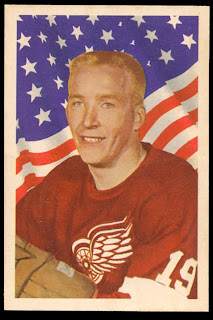 All of the Detroit Red Wings have this background image behind them, regardless of what their actual nationality was. Since they were the only team from the United States included in the set, this is appropriate.

So let's move North of the Border: 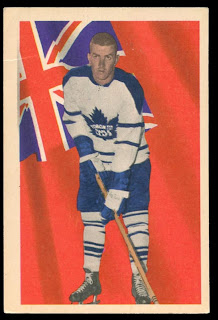 This is the background behind all of the Toronto Maple Leafs players. Although we now know the red-and-white flag with the maple leaf on it to be the National Flag of Canada, our friendly Neighbors to the North didn't actually adopt that as their flag until 1965. Before that, the Red Ensign shown above was flown, or the Union Jack (since Canada was still a Commonwealth of England), which was a part of the design. The Red Ensign is still in use, as the basis for the design of the Provincial flags of Ontario, Manitoba and British Columbia.

Here's the twist...the Red Ensign was heavily favored by the English-speaking areas of Canada. So, for the players who played on the team from the heavily French-speaking Quebec: 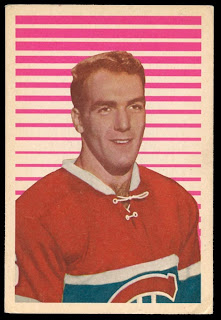 The Montreal Canadiens didn't get a flag at all. Instead, they had parallel solid-color bars placed behind them. The colors changed; some had pink bars, as shown above, but others had blue. And there were also green-and-yellow and red-and-yellow patterns. I am not sure if there was a reason for which player received which color, if you know, mention it in the comments section. 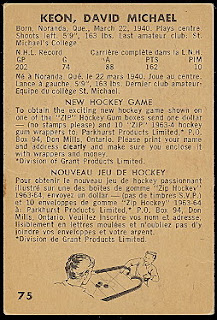 The back design is really basic, considering the front design. There are some pretty basic stats and vitals...but most of the back is dominated by an advertisement written in two languages. The tabletop hockey game you see above was available for one dollar (Canadian, as it has an Ontario mailing address) and ten wrappers. I wonder how well that game was built, or if it was little more than heavily-reinforced cardboard.
Posted by Chris Stufflestreet at 8:30 AM