Through my website and my official position as the "Card Info guy" for the OBC group, I get a steady stream of emails, some of which end up here in the Q&A feature I have on this blog most Fridays.

A lot of the emails are simply asking about how much their cards are worth, and most of them are missing important things, like years of issue, card numbers and condition (the most important part). Sometimes, however, a picture is added to the email that is really helpful.

I recently opened this email from a lady named Nancy:

"Looking for the value of this card, for a friend."

And this was the picture attached to the email: 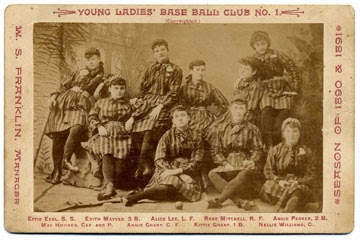 I didn't have anything to add, but thanks to my network of trading and collecting friends, I happen to know a collector of this type. So I asked her for info and learned a lot more about something I'd never known about.

While many of us are familiar with the All-American Girls' Professional Baseball League that was active from World War Two into the 1950s thanks to the 1992 film A League of Their Own, it's not as well known that there have been all-female baseball teams -- sometimes organized into what were known as "Bloomer leagues" -- for as long as baseball has been a sport.

The image shows what is known as the "Franklin" team after the manager's name that appears on the left side. The right side gives one of the earliest certain dates that can be given to pictures like this. However, there isn't much else known about the team, since no city or state is given.

This card is commonly referred to as a CDV (short for carte de viste), which are larger pictures featuring a studio photo. They are also called "cabinet" cards due to their larger size. In many ways, they're similar to the professionally-made studio photos from the late 1800s and early 1900s that are now cherished keepsakes among many families (my wife has one of her grandmother and great-grandparents that was taken in Russia before they came to America). Often placed onto heavy cardboard, these pictures could behave words printed onto them and were occasionally used to advertise businesses that sponsored local teams.


It's probably the most common of the "Bloomer girls" cards from before 1900, which gives the sense that it may have been issued in a larger city like New York, Philadelphia or Boston. Even though it's easier to find than any other 19th-century ladies' baseball photo card, it will likely set you back several hundred dollars on the open market.
Posted by Chris Stufflestreet at 8:30 AM