From 1962 through '82, Topps featured several multi-player rookie cards in its set. Sometimes the rookies were grouped by team or league, other times by position.  Sometimes, a rookie would take a little bit longer to develop and appeared on the "rookie" cards a couple of years in a row. For instance, Lou Piniella showed up on them in 1964, '68 and '69 (All with different teams). However, Piniella wasn't the record holder. 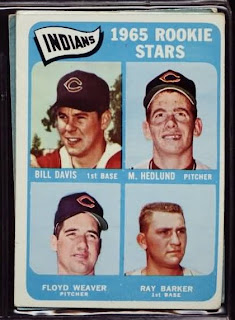 1965 Topps #546
This late-series card came out near the end of the 1965 baseball season, which was when Davis got his first call to the bigs. He appeared at the plate ten times as a pinch-hitter and collected three hits. That .300 mark would be his best as a major league player. 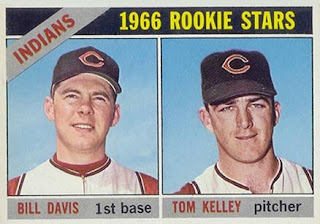 1966 Topps #44
Unfortunately for Davis, the Indians already had a first baseman named Fred Whitfield, who -- though not a star-caliber player -- was performing solidly at that position for them, so Davis wasn't able to get a starting role. Rather than waste him as a part-timer, he was sent down to Portland where he could play regularly. Late in the season, he returned and won a game with a pinch homer.

Whitfield had struggled through injuries in '66, so Davis was in place to win a starting job for '67. 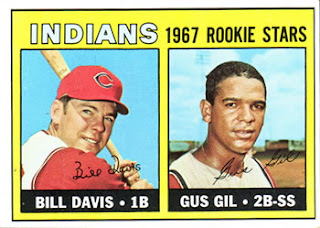 1967 Topps #253
Sadly, on January 21, 1967, Davis injured his Achilles tendon during a pick-up basketball game. He appeared in that year's Topps set, but sat on the DL for the season. That injury likely dropped him from the Indians' plans for the future. 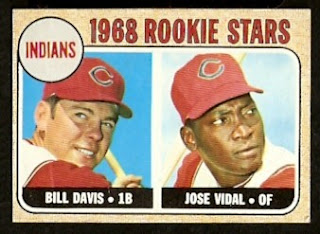 1968 Topps #432
Davis did appear on a 1968 card as well (a more closely cropped version of his '67 picture). However, he spent the season in Portland. One short call-up as an emergency back-up on June 29th happened, but Davis never played in a game and was quickly sent back to the minors. When the rosters expanded in September, he never got called to the parent club. After the season, the Tribe traded him to the expansion Padres. 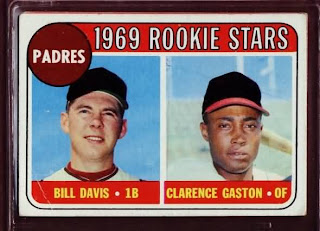 1969 Topps #304
As a member of an expansion team, Davis had the chance to prove himself. Originally slotted to platoon at first with Nate Colbert, he started slow and was soon relegated to pinch-hitting duty. That May, he was traded to St. Louis but never managed to play another big league game again.

After heading back down the minors, Davis was offered the chance to play in Japan but opted to keep his family stateside and went into the real estate business. Despite an overall .181 batting average, one home run and five RBIs in his career, Bill Davis is the all-time holder of the record for the most Topps multi-player rookie cards. He never appeared by himself on a card, though.