I'm spending the entire week at The National in Chicago. I'm helping out at booth 1012, so if you're nearby, stop in and say hello. 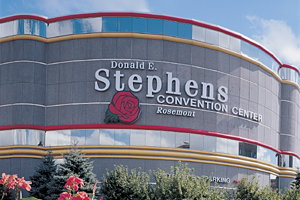 (This is the place...bring a good pair of shoes if you come)
Just a few minor things this time around.

During a break in the day's activity, I was able to stop over at the Topps booth and talk with Clay Luraschi. Yesterday, I won a Hobby box of 2011 Bowman simply by knowing the answer to a trick question (see yesterday's post) and gave the box to my daughter. She thanked Luraschi for the gift.

While speaking, I told him I was a blogger and he asked which one. I told him The Vintage Sportscards Blog and the 1973 Topps Photography Blog. He said, "Oh...that's you?" So he's evidently seen my work. I don't know whether that was a good or bad thing.

Speaking of kids, at one point in the afternoon a boy who looked to be about 12 was looking through the vintage football cards at the table where I'm working. At that age, I was often shooed away by dealers and hated it. However, I still remember -- by name -- the few dealers who showed some interest. So...I went ahead, pulled up a chair and talked with him about what he was looking through. While thumbing through pages of 1977 and '78 football, he told me he began collecting by pulling out his father's own childhood collection and organizing it. It was a great talk about airbrushed helmets, what constituted "vintage" and re-sorting cards into teams/positions/etc. Finally, he pulled out some money and asked to pick up this card: 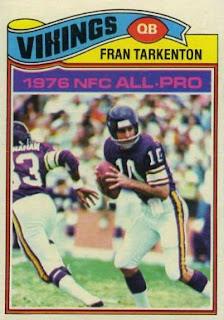 A 1977 Fran Tarkenton card. It was pretty cool to see a young fan interested in vintage stuff, and helps give me hope that new collectors will be there in the future. While I'm certain he'll never see this post, I hope a little effort from an adult seller to a young hobbyist made a lasting impression.

After the show, I was able to talk about blog stuff with Matt Glidden, the writer of the Number 5 Type Collection blog. We've been hobby friends for years, but both have found that blogging has been a very nice way to share our interests with others. I'd love to meet with other bloggers at the show; stop over to booth 1012 and I'll be sure to plug your blog here as well.
Posted by Chris Stufflestreet at 8:30 AM