The Fall Classic...and a Hobby Classic

Today is the start of the World Series. Rather than running a repeat entry, I'll link to the four-part series from last year:

Instead, I'll show off this card from a Series that took place in my youth: 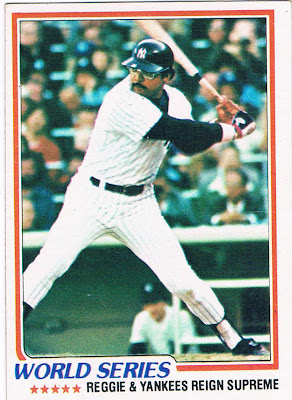 Say what you want about the Yankees now, but at that time the team was just coming out of a 15-year slump and that man getting ready to take a big swing was one of the missing pieces needed to make that happen. Not only that, but he had his own candy bar. That may have also attracted my attention at six years old.
Posted by Chris Stufflestreet at 8:30 AM