Evolution of a Football Design

For those who complain about how Topps basically recycles its baseball design for its football set later in the year, here's a post that explains it isn't a new concept. While I agree that it is a waste of a creative team to do so, it's merely a way of getting things done so a corporation can focus on making its money.

At the beginning of the post-World War II era, Bowman tried to get into the football card field. Whether its sets were quickly made or if there was only a limited window available, I have no idea.

As you can see from the scan: 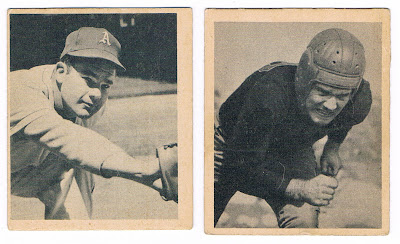 Bowman simply used the same front design for its football set that was used in the baseball set earlier in the year.

One thing that was different was the back design:

(Click to see the pictures in a larger size)

Where the 1948 baseball set had only one ink color, two were used in the football set. It's a layout that would appear again in the '49 Bowman baseball set, as illustrated on the third card in the scan.

There was no Bowman football set in 1949, so we'll never know whether they would have used the same design featured in the last series of their baseball set that year (explained in this post from April). However, in 1950, they still went with the same format: 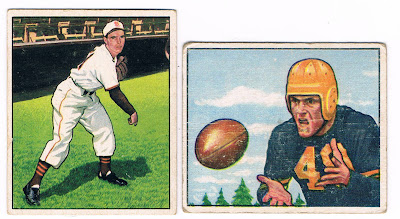 In 1950, both the baseball and football sets featured both horizontal and vertical orientations.I've included one of each type to show the difference.

This time, the backs were nearly identical:

Essentially, the word "Football" has been substituted for "Baseball." There are a couple of minor changes, but they're basically the same back. Without looking at the front picture, it would have been easy to get the two mixed up without a closer look.

In 1951, there was a better definition between the sets: 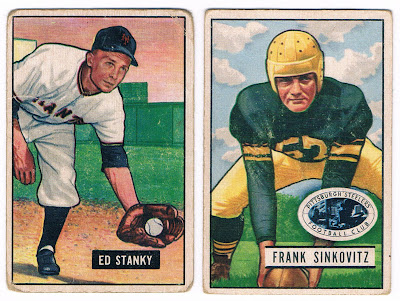 While the baseball set used a simple black strip with a name inside, the football cards swap the colors and add black lines to the top and bottom, and then place a team logo on the card. In my opinion, this was a very nice improvement. Had they used the logos on the baseball cards, Topps couldn't claim to be "innovators" for putting them on their 1952 cards. In any case, Bowman beat them by several months.

However, the backs were once again similar: 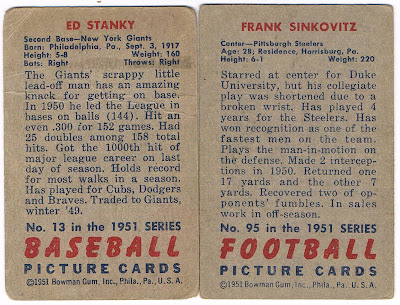 About the only format change involved the name of the sport in red ink.
Posted by Chris Stufflestreet at 8:30 AM