The Hockey Season is Underway...A Glimpse From 50 Years Ago

With the NHL hockey season now underway, here's a look at a Topps set from exactly 50 years ago.

The 1961-'62 Topps hockey set was designed with the game of hockey in mind. Here's what the front of the card looked like: 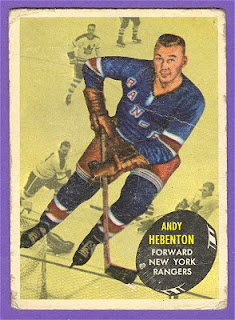 The player's name, position and team are placed inside a puck icon. This was the first time any hockey-specific equipment was used in the design of a Topps set. The player picture was generally an action shot, which was superimposed over a generic game picture.

The set only featured three of the NHL's six teams, and those three teams were grouped together by number. Cards 1-22 featured Boston Bruins, cards 23-44 had Chicago Blackhawks and the New York Rangers made up cards 45-65. Players from the Red Wings, Maple Leafs and Canadiens would show up on Parkhurst cards that year.

The puck would also find its way to the back of the card: 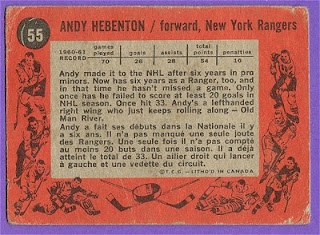 As you can see from the illustration, the cards were bilingual. There was a single line of stats; up to that time (and for several years afterward), Topps did not use lifetime numbers on its hockey cards.

Each team's first card had the head coach. This was the first time Topps used the coaches in their hockey set. The coaches had a different design: 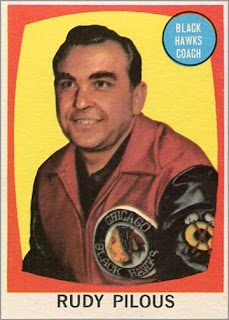 
The design looks like a TV set turned on its side. The same design was used for the rookie players that appeared near the end of each team's series: 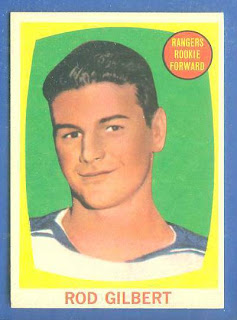 Topps continued the "TV" design on six "action" cards (two for each team): 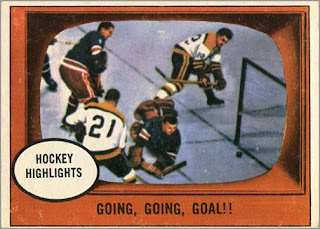 This was similar to the Highlights cards from the 1961 Topps football set.

Each team also featured a card that had the assembled team photo: 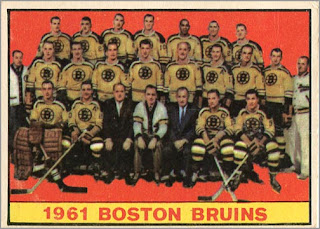 Finally, the last card in the set was a checklist card: 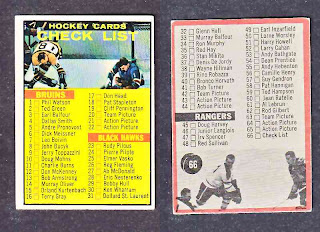 As you can see, each team is clearly set into its own section of the set. Collectors of 1961 Topps baseball will recognize the same design, with the game-action pictures on both sides of the card. This was also the first checklist Topps used in its hockey set.
Posted by Chris Stufflestreet at 8:30 AM