I've featured cards on this blog before where the original owners used any means at their disposal to "upgrade" their cards to signify a trade. However, sometimes a player isn't featured in a set, so you end up with cards like these two from the 1961 Topps set: 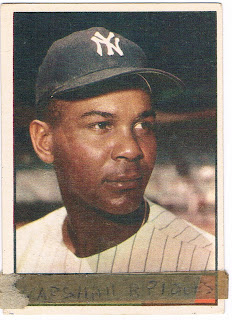 This is card #28 and pictures Hector Lopez. He was a member of the Yankees between 1959 and '66. Since he actually hadn't been traded, I'll assume this card was a duplicate, since the tape names Marshall Bridges. Bridges pitched for the Yankees in 1962 and '63 but never managed to get on a Topps card. As a result, the original owner needed to make one. 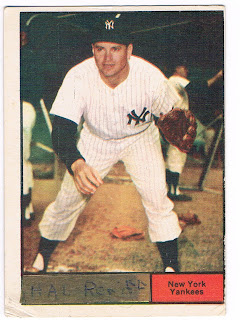 This is card #40 and pictures Bob Turley, who was sold to the Angels after the 1962 season. The tape mentions Hal Reniff, who was with the Yankees in 1961 but didn't appear on a Topps card until the following year. I'm also assuming this was a duplicate that was adjusted to get a card for a Yankees team set.
Posted by Chris Stufflestreet at 8:30 AM