More "Beaters" For the Binders

So, the other day I was out to dinner with my wife and she sets something on the table...and right on the top is this: 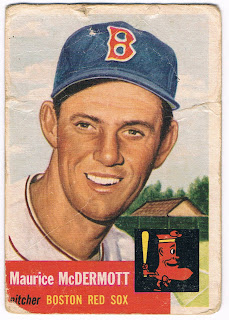 I didn't even get a chance to see his name, but I still said, "Hey! Mickey McDermott!" I've seen that card before, but she seemed impressed to know that I could identify the player by his picture.

Actually, I used to live near Poughkeepsie, New York, which was McDermott's hometown. In 1952, McDermott faced 27 batters in a one-hitter against the Senators. The only batter to get a hit was thrown out trying to stretch it into a double. This 1953 Topps card says nothing about that game; I blame the New York bias. He wrote an autobiography called Something Funny Happened on the Way to Cooperstown just before his death in 2003.

I've mentioned before that my wife will sometimes pick up cards for me. It's a relatively easy process, ever since I placed my online wantlist page into the bookmarks of her phone. With that, she'll know if I need a card without having to call me and ask.

Here's what else came with McDermott: 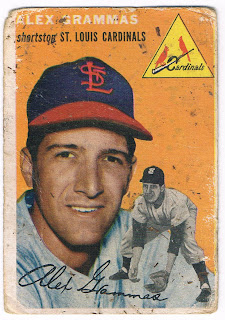 This is Alex Grammas's rookie card. He would stay in the majors until 1963, usually as a utility or backup infielder. He would go on to a long coaching career, including stints as manager of the Pirates (1969) and Brewers (1976-'77). 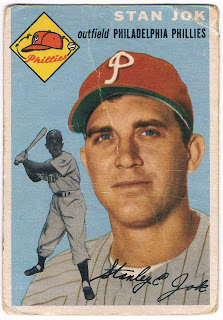 1954 was also Stan Jok's first year in the majors. His career wasn't as long as Grammas's however; he was waived early in the season by Philadelphia. The Chicago White Sox claimed him but sparingly used that year and only in six games in '55 before they also let him go. 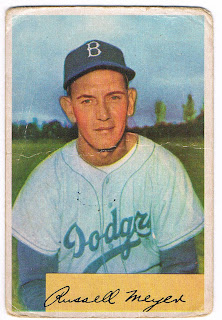 The last card was this Brooklyn Dodger. In the big scheme of things, he's a common player but collectors know there is no such thing as a "common" Dodger in the 1950s. Like the Yankees, the cards get a premium simply because of who they are.

Russ Meyer (not the movie director who favored top-heavy women) was called "The Mad Monk" due to his sometimes volatile temper. When this card was printed, Meyer was in the middle of a very unique accomplishment: between 1953 and '54, he went 24 straight road games without a loss. Only Allie Reynolds has had more.

Another veteran of World War II, Russ Meyer passed away in 1998.
Posted by Chris Stufflestreet at 3:08 AM