Orange is a good color for today. Not only is it a color associated with Halloween, it's also the color of a box of Wheaties. And Wheaties boxes have been associated with sports figures for generations.

Wheaties placed baseball stars on its boxes as early as 1935, such as this one: 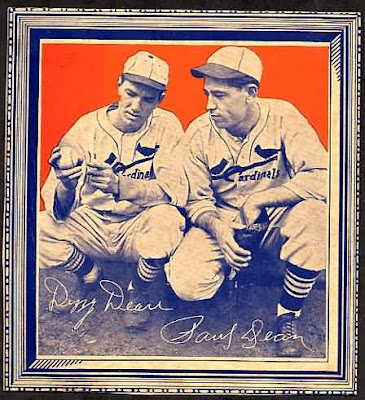 This is a Series 1 type of the brothers Dean. Measuring 6 inches by 6 1/4 inches with the frame, there were 26 different pictures used in this series, including two of "Jack Armstrong, All-American Boy." He was a fictional character. This picture of Dizzy and Daffy Dean was the only one that featured two players.

Eventually, Wheaties realized that kids might learn something while the cereal box was sitting on the breakfast table: 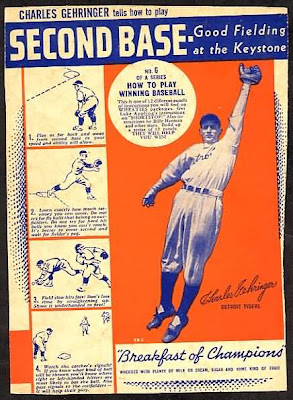 This is from Series 5, which appeared in 1936. The various subjects explained how to play their positions, giving helpful suggestions. There were 12 players featured, although some had variations. This is a complete back panel from a box, measuring 8 1/2 inches high by 6 1/2 inches across.

The "tips" continued through another series in 1937. Eventually, it became focused on the player and color was added: 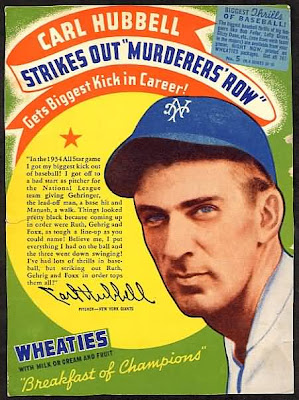 This back panel comes from Series 10, which arrived in 1938. There were 16 players in this series, which included a single player from each major league club.

There were 14 different series of Wheaties box panels from 1935-'39, with a series called "Champs of the U.S.A" that appeared in 1940 and '41. While baseball players made up a bunch of the series, they weren't alone. In fact, Series 2 was completely devoid of baseball players.

But featuring sports figures on Wheaties boxes isn't a recent development at all.
Posted by Chris Stufflestreet at 8:30 AM

Email ThisBlogThis!Share to TwitterShare to FacebookShare to Pinterest
Labels: Wheaties