Here's a card I picked up a little while ago: 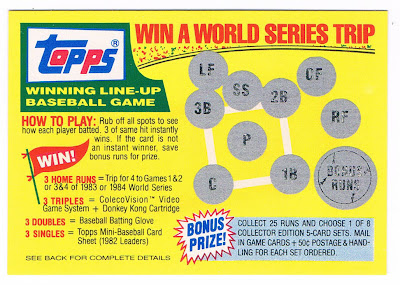 Before randomly-seeded "chase cards" became the norm, this was the "insert card" of my youth. This card was seeded inside a wax pack of 1983 Topps cards. As you can see, it was a simple "scratch-off" game. Some cards revealed prizes, and others could be saved for a send-away glossy set. The details are written on the back inside a little box: 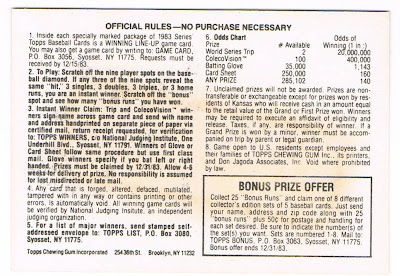 Yes, that's a gum stain in the middle. I'd prefer it there instead of a regular card.

I scartched off several of those cards in 1983, but never got anything besides points. However, in 1984, I opened one of the packs sitting inside my Christmas stocking and won a batting glove. Unlike the card above, there was an expiration date of 12/15 on the '84 cards. My mother wrote a short note to Topps asking if they could overlook the little ten-day issue...and Topps sent me a batting glove. I should have kept it, but I wore it out pretty quickly in Little League the following spring.
Posted by Chris Stufflestreet at 8:30 AM