Last week, Greg over at Night Owl Cards showed off some pogs that were inserted into packs of cards during the 1990s. Pogs were a fad at that time, but were a rehash of an old-time concept: the paper toppers used to "cap" off the tops of milk bottles back when local dairies made home deliveries. Greg lives in the same part of northern New York where I grew up and I can tell you that the area is a big dairy producer, so there was a lot of reminiscing by the "old-timers" in the 1990s about how pogs weren't really new items at all.

I really don't know of any baseball-related pogs from the 1950s, but I really wouldn't be surprised to see one surface. However, there was an even earlier set of cards that mimicked their design: 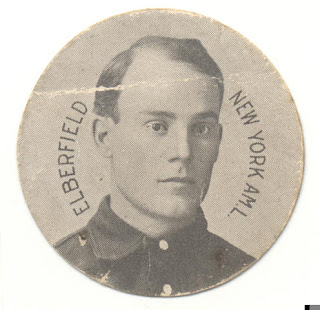 (Not mine...This image and the one below were grabbed from this Web page)
This is a Colgan's card and dates from 1909-'11. The set has been catalogued as E254 and was included one at a time in five-cent tins of Colgan's Violet Chips or Colgan's Mint Chips, which were a gum product at that time. The back advertised the product: 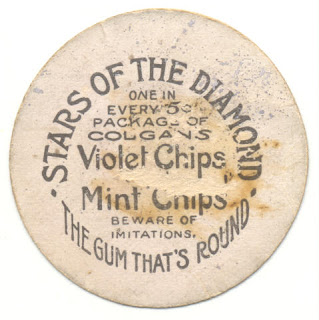 The cards are the size of a silver dollar, one and a half inches in diameter.

There are also two other series of Colgan's that are designated as E270. One is red-bordered and the other is called "Tin Tops" because of the wording of the back advertisement. Both of those sets date to 1912 and 1913.

A Robert Edward auction a few years ago had this neat store display, complete with Honus Wagner's card and a couple of Colgan's Mint Chip tins: 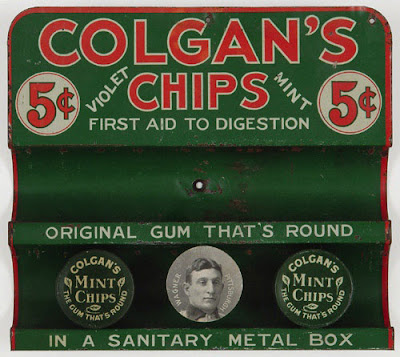 Also, an advertisement for Colgan's Chips was incorporated into the cover of Lew Lipset's The Encyclopedia of Baseball Cards Vol. 2: Early Gum and Candy Cards. Here's the cover of my own copy of the book: 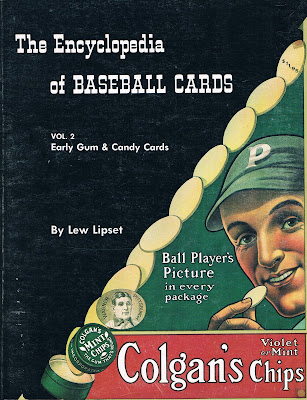 To tie this all together, I was talking with another collector who has a nice collection of these cards. He told me that he once explained to another advanced collector that his focus was E254/E270 and was greeted with a disapproving reply: "Those aren't cards. They're pogs."

Say what you want about them, I like them.
Posted by Chris Stufflestreet at 8:30 AM

Email ThisBlogThis!Share to TwitterShare to FacebookShare to Pinterest
Labels: E254