In Celebration of the Hockey Season

Here's a neat set I was just writing about as part of my gig with the Cardboard Connections Website: 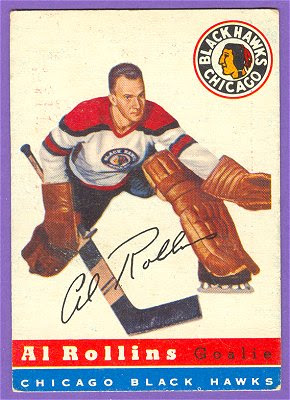 This is the only hockey set Topps issued in its larger-size format. The set was released in 1954-'55 and consisted of 60 cards. Due to territorial issues and the presence of another company issuing hockey cards in Canada (Parkhurst), the set contained only players from the four NHL teams them playing their home games in the United States: the Boston Bruins, Chicago Black Hawks, Detroit Red Wings and New York Rangers.

The backs reflect the American origin of the teams: 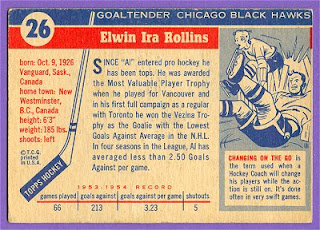 The backs are printed in red and blue ink on a white card stock. One thing that may seem odd to long-time collectors is the lack of any French translation, unusual for many sets of the pre-O-Pee-Chee era.

After this set, Topps stepped back from the hockey card market for two years, opting instead to watch the market and learn from the competition. In the meantime, Parkhurst issued a set in 1955-'56 that utilized a front design that resembled what Topps had featured in this set.
Posted by Chris Stufflestreet at 8:30 AM