"I have a Bob Clemente Baseball Card that looks a lot like a Topps 1965 Card, but on the back it states that it is a Dover reprint.

I have the following questions:


2) When could this card have been reprinted?

Your card was included in a book called Hall of Fame Baseball Cards by Bert Randolph Sugar. It came out around 1983 and was essentially a collection of reprinted baseball cards going back to the 1800s. The cards were glossier than the originals, perforated and each one clearly stated "A Dover Reprint" on the back to differentiate them from authentic cards. 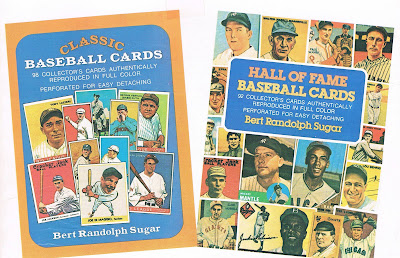 It's the book on the right in the above picture. I own the other one. Here's a random card from that edition: 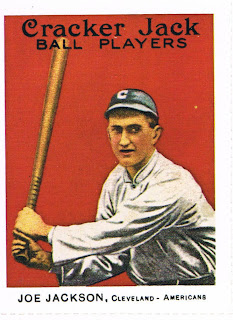 It looks like a 1915 Cracker Jack card of "Shoeless" Joe Jackson, but it's very glossy and actually printed on thicker, sturdier cardboard stock than the original was. Here's the back of the card: 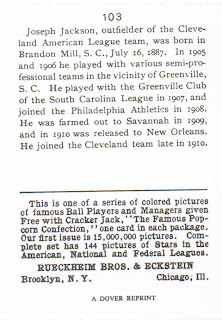 And right along the bottom, you can see the words "A Dover Reprint." Dover was the name of the publishing company Sugar used for these books.
Sugar authored a number of these books in the late 1970s and early 80s. They are fairly easy to locate in complete form, including this one on Amazon that is $5.99 new or as little as 99 cents used:

As for the final part of your question...since it would cost six dollars to get the complete book with your Clemente card still attached, the value of your card is worth much less.
Posted by Chris Stufflestreet at 8:30 AM

Email ThisBlogThis!Share to TwitterShare to FacebookShare to Pinterest
Labels: reprints