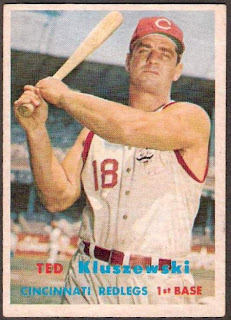 This is the perfect time to show this gem from the 1957 Topps set
A:

Ted Kluszewski was a big power hitter in the 1950s. He was to the National League what Rocky Colavito was in the American. He was known for his power, as illustrated by his massive muscles that led him to go without a t-shirt in the Reds' uniforms of the era (as in the card above). He was also able to hit for average and keep his strikeout totals low, which many power hitters were unable to do.
Unfortunately, a series of injuries limited his career numbers so "Big Klu" was never able to get Hall of Fame-type numbers. Still, he's well-remembered among fans of 1950s baseball and a source of pride for Polish-Americans. And from what I've been told, he was always good with the fans (another thing that makes certain players beloved).
Posted by Chris Stufflestreet at 8:30 AM

Email ThisBlogThis!Share to TwitterShare to FacebookShare to Pinterest
Labels: 1957 topps