A couple of weeks ago, this card was featured in Night Owl's blog and I commented on it. As a public service to fans and collectors, I'll mention it here as well.

In his blog, Greg showed this card: 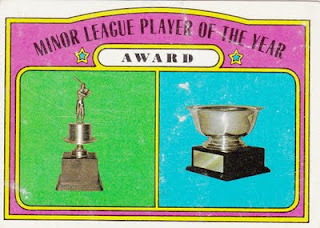 1972 Topps #624 -- Minor League Player Award
At first, some collectors might do as Greg did and wonder why there was any reason to include the award for the Minor League player of the year in a subset along with the Cy Young, the MVP and others. I might agree, except for one little issue.

Take a close look at those two trophies.

Do they look familiar?

They should, at least to long-time Topps collectors.

While the trophy on the right looks like this: 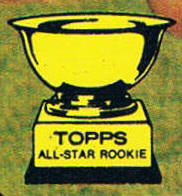 That 1972 card may have been the first look collectors were given at the new Rookie All-Star trophy that would adorn cards in 1973 and from '75-'78.

I have no idea why they are shown as the award for Minor League player of the year, though. Or why two trophies are given for one award. Perhaps a back had been made for the card and no image was available...and somebody grabbed a mock-up of the Rookie All-Star trophy switch in order to get something out for the series.
Posted by Chris Stufflestreet at 8:30 AM